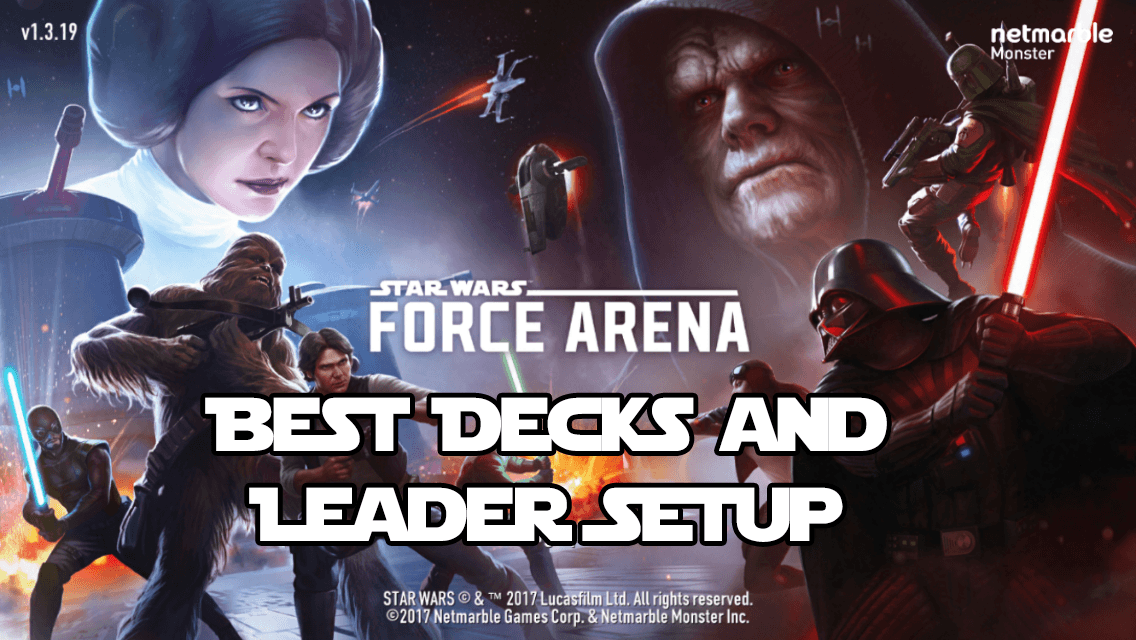 We have all been enjoying Star Wars Force Arena since its release to mobile devices since early 2017 by netmarble. Star Wars Force Arena is a real-time mobile PvP game where players assemble a team made up of a leadership with a combination of 7 character cards from roughly 80+ to choose from on either the Galactic Empire or Rebel Alliance.

Or as delightfully included on the main Star Wars Force Arena website the following is what you can expect while playing Force Arena:

With so many combinations of Star Wars deck / character cards to choose from, it takes some time and patience to experiment with what works best in many of the different gameplay situations. There are many things to take into consideration such as some characters are great at range, or against mobs, or at attacking specific units or better for turrets – it is definitely worth reading the details and advantages tabs for each card in your deck to get a better understanding of how to best use each card.

Below I will provide you with what I’m currently using in my card decks and what has worked the best for me so far after playing Star Wars Force Arena for over a few weeks since its release where I have reached Tier 4, which is halfway up the Tier Guide ladder grind. So do keep that in mind when deciding what works best for your gameplay style and what Tier you may currently be at and what cards may be available to you at this time. I would also like to mentioned that I have been playing the game completely free and have not spent a dime on credits or crystals.

The Galactic Empire has been my favourite so far and I would warrant a guess it may be a favorite of many other as well based on how I currently see my wait times are a tad longer when playing, but I digress. That being said I have invested more of my credits into the Empire. Below you will see the current two decks I have on the go while playing as the Empire. 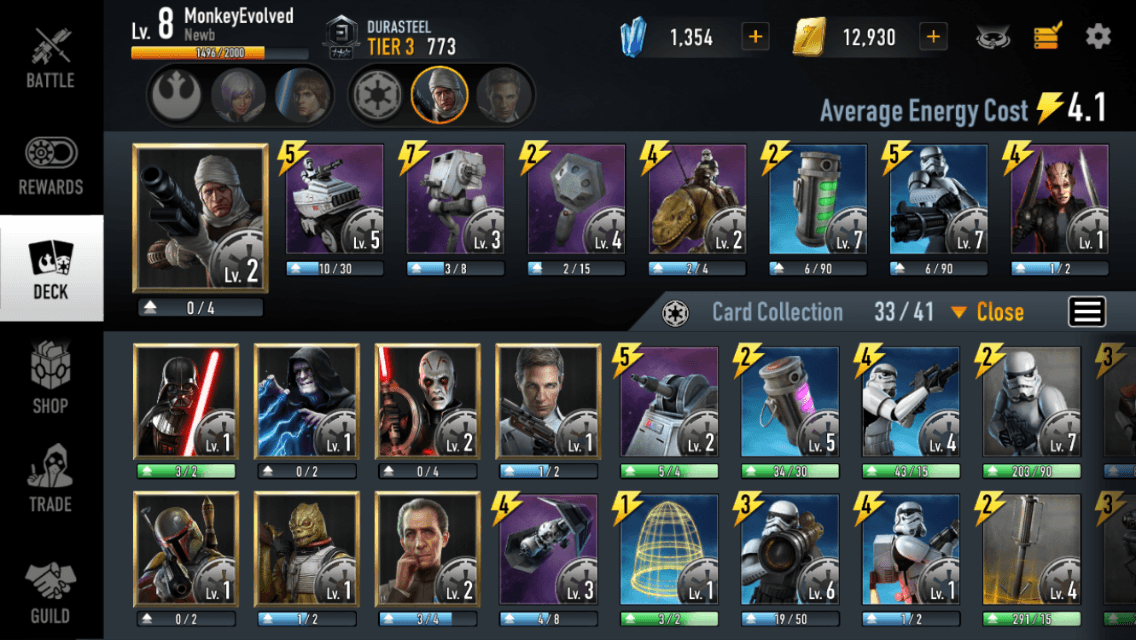 My main Galactic Empire deck and the deck I probably use the most is lead by the bounty hunter Dengar at a current level 2. This deck provides me with enough grunt force when pushing turrets and enough support to help with those mass mobs of units sent by the enemy. The goal of this deck is to aggressively push the enemy turrets as fast as you can. 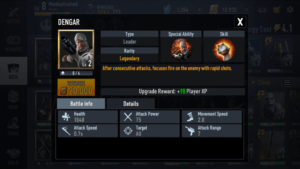 Dengar is by far my favorite Galactic Empire Leader in Star Wars Force Arena so far in my deck. For me he is the perfect combination of range for single targets and dealing with mobs of units. He uses his ranged weapon for powerful blows to enemy leaders, while also having a Grenade Toss that deals with mobs quite efficiently. 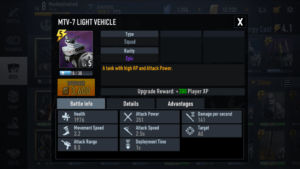 I would think that the MTV-7 is a staple for any deck, as it is one of the first cards in the game you start off with and it a great all around unit to have, especially when targeting turrets. When close to a turret I usually send the MTV-7 in first so that it can absorb any damage and then I follow in with Dengar and supporting units if I have enough energy. 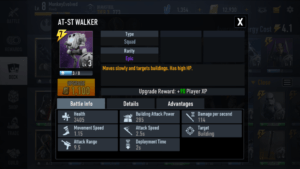 You don’t get the AT-ST WALKER at the very start of the game, but when you do get it I highly suggest using it. The Walker can be used strategically for aggressive turret pushes because that’s all it will attack (unless the enemy is using a structure card – it will attack these). These do cost a lot of energy so it’s usually best to take care of any extra enemy units first before deploying your walker. 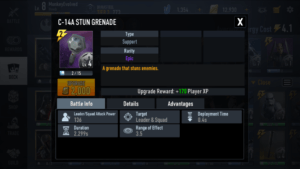 Oh how I love this Stun Grenade, especially in combination with Dengar as my Leader (or any leader really). This grenade is useul for stopping groups of units and enemy leaders from running away as it does a small amount of damage as well as stuns. When an enemy leader has about half of their life left, this grenade is perfect at damage them a little more and leaving them vulnerable for you to take the last couple of shots. 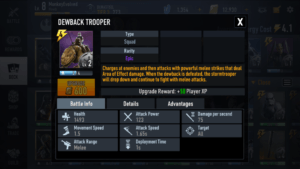 Now this unit is a brand new one and wasn’t immediately available when Force Arena was released, but I have grown very fond of the Dewback Trooper. When facing the force of group units the Dewback Trooper can be useful in charging at the enemies dealing area of effect damage. And as a plus when the Dewback dies, the stormtrooper jumps of and continues fighting. 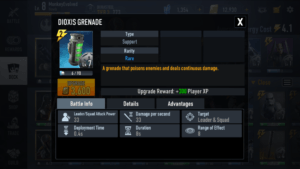 Yet another favorite support weapon that I love to use. This grenade explodes for an area of effect of continuous damage that is considerably strong. This is very useful again for those mobs of units, but I have also found it to be very useful for an almost dead enemy Leader who starts to run away – there is nothing more satisfying to see them run and fall to the ground. 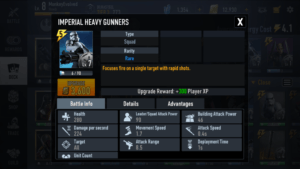 These guys come in a squad and can be a very powerful when used correctly as they focus fire on a target using rapid shots – so for example if you orient them behind your leader when attacking a stronger enemy unit or leader, they will focus fire on that unit and take them down very quickly (I say behind because they do die easily when attacked). Another tactic I use is to place these guys behind your turret when it is being attacked as the enemy is focused on the turret and they usually do a great job at cleaning up. 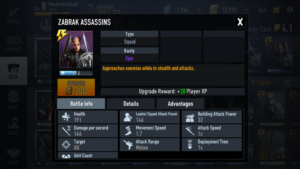 This is a stealthy squad that can very easily be used to surprise enemy units. When summoned they come out in a 3 part assassin squad and are immediately cloaked until they attack something. I loved

The Rebel Alliance has a completely different set of cards when compared to the Galactic Empire, but again a lot with very similar functions. For a complete disclosure, my favorite side to play has been the Empire, but if one does want to get further in the game it’s smart to follow Missions, which do require to switch between the two once in a while. Below you will see my favorite set-up so far for an overall less upgraded squad than my Empire counterpart deck. 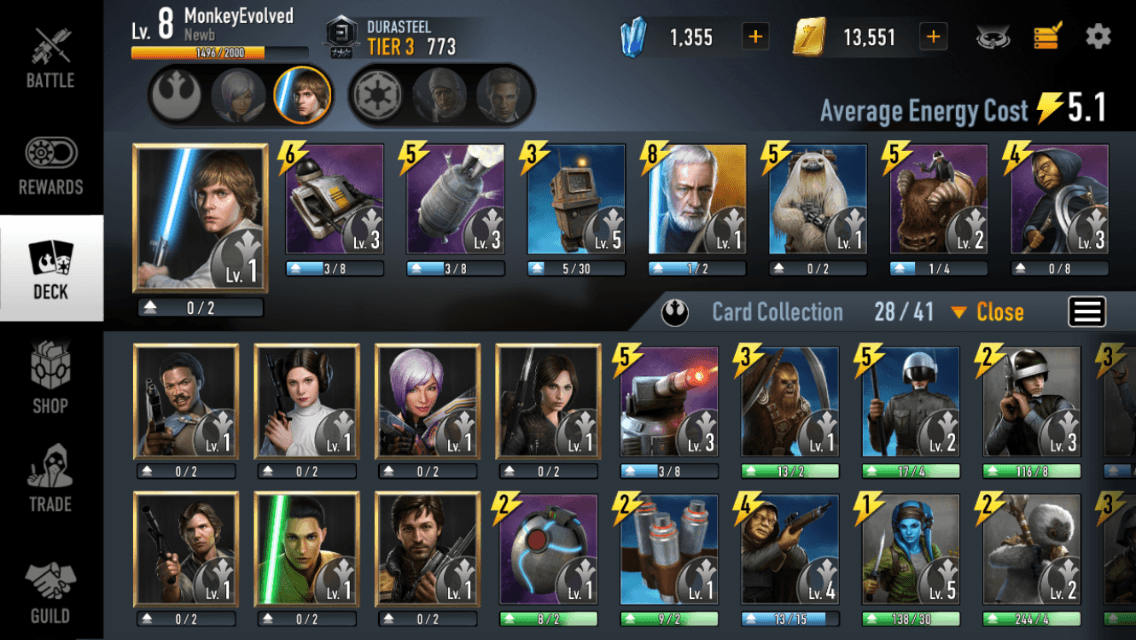 The above is my main Rebel Alliance Desk in Start Wars Force Arena. The goal of this deck for me is to play a little bit of defence while being very targeted. If you read through my above Empire deck, there is a difference here as there are no squad units – this means you have to be very specific to which unit is summoned when, of which I have found to be very fun. 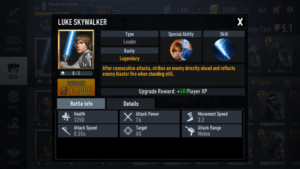 Luke Skywalker is available from the very start and can be thought of as a staple leader in Force Arena (or any Star Wars game ever). But the truth is, he’s a strong fighter who can take a lot of damage. And if you have him stand still while being attacked by blasters, her will reflect their attacks and revert them back at the attacker (super useful). His skill is a light lightsaber slash, which is great for dealing 250% more damage to all units within his reach. Luke Skywalker is also definitely better with his Unique Card: Ben Kenobi as when Kenobi dies, Luke gains 20% in damage until he dies. 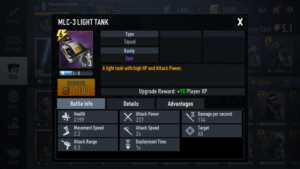 This is a must for most decks, the MLC-3 is great for absorbing damage and destroying enemy turrets easily when given a chance. My strategy when using tanks is to first send them in front of my leader towards a turret and then following with my Leader so that the tank absorbs more damage and then slash at the turret until it explodes (if I can of course). 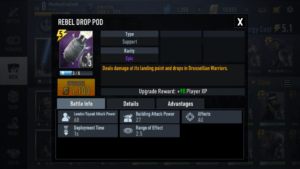 The Rebel Drop Pod is a support card that can be used to drop the unit anywhere, which can be a very strategic unit. Such as at any point you can drop the pod on any of the turrets right on the turret (rather than outside the “red zone” as with other units). 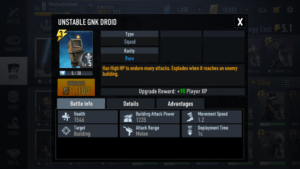 Now this card / unit is a unique type to the Rebels, it is classified as a squad, but is anything but. This is basically an exploding box that slowly wobbles towards a turret and then deals a huge amount of damage to it. The trouble is actually getting the box to the turret. Strategically you have to find ways to conceal the GNK’s approach to a turret by either putting it on the other side of the map where battle isn’t happening or putting it with a group of units. 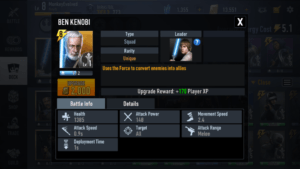 Ben is a must with Luke Skywalker (and can only be used with Luke). For once when ben dies Luke gets 20% more damage. And two Ben Kenobi can convert enemy units into your units – super useful. I usually time Ben to appear right when an enemy summons a tank or units I know that will turn around and be able to easily kill the enemy leader. 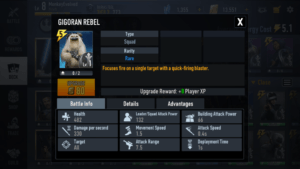 These white fluffy Gigoran’s are basically enemy leader assassins. They focus fire on one unit and do so with a quick firing blaster, which is effective if they are given a chance to get some good shots in. Use the Gigoran Rebel’s behind objects or your leader for fill effectiveness. 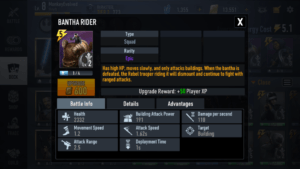 The Bantha rider is a newer unit that was not available upon the initial release of Star Wars Force Arena. The difference between this rider and the Empire’s is that this one only attacks buildings, so use this when focussing on those turrets! 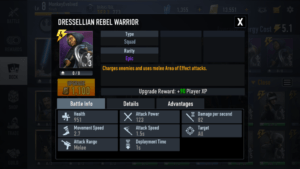 These warriors can be great at dealing with those squads or mobs of units as it can charge and has an area of effect damage. You will need this unit as in this build / deck there are very little area of effect type units, so use this one carefully and when needed.