The Prison Break is the second heist in GTA V online and this time there is a cost to the set up. The leader must pay a total of $40000 to get this heist going and then you need to recruit a team of four to get things rolling.

The goal is to break Maxim Rashkosky out of Bolingbroke. The ground team takes the transport bus, poses as guard and inmate, and goes into the prison to get him out. Demolitions takes care of the inbound transport bus and the pilot collects them in the plane.

There are four setup missions (Plane, Bus, Station & Wet Work) and then the final Prison Break mission. You can see separate videos for gameplay of each piece below.

Here is the gaemplay from the finale mission in the Prison Break Heist. After you have completed all four setup mission (all available below), you unlock the final mission where you finally break Rachkosky out of prison. Your team of four is split into separate unique roles and the mission can be a little tough if you’re not coordinated.

Steal an aircraft from the vegas contraband smugglers at McKenzie Airfield. To be used to get Rashovsky out of the county after the prison break.

Hijack a prison transport bus in a high security convoy for use in the break out. When clear of the authorities, store it near Sandy Shores.

Half of the team has to get a police cruiser, pose as cops, and go into a police station to get the prison transport schedule. The other half has to retrieve Rashkovsky’s stolen car from a cargo ship at the Port of LS.

Half the team has to take out some lawyers outsite the City Hall, and bring back their deposition. The other half has to silently dispatch Rashkovsky’s business partner and his guards. 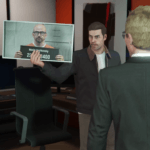 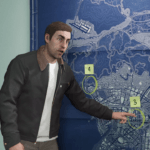 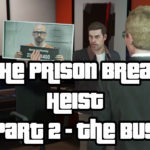 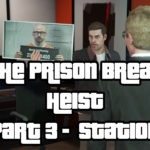 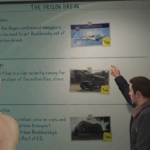 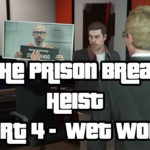 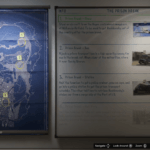 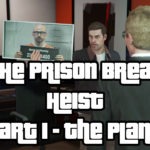