If you want to be a hero that best takes in the most damage by leading the attack against enemy lines and breaking the opposing teams fortified positions and tight groups, then try being a Tank hero in Overwatch.

The Tank heroes are a high health, high durability role best suited for disrupting enemies and soaking up damage whilst leading the battle charge. Covering your allies through shields, damage barriers  or shear effective projectile absorption. Because of a Tanks high health, it can sometimes take multiple heroes to effectively get rid of a tank, making them ideal for the front lines and also less susceptible to abilities that would instantly kill other heroes. Under the right circumstances, Tanks can put out large bursts of damage – which is generally kept in check by hero specific tradeoffs like cool downs and limited effective range or ammunition. This also makes Tanks a strategic role as they must choose to unleash their power wisely. The Tank is the anchor of the team and can turn the tide of any battle. 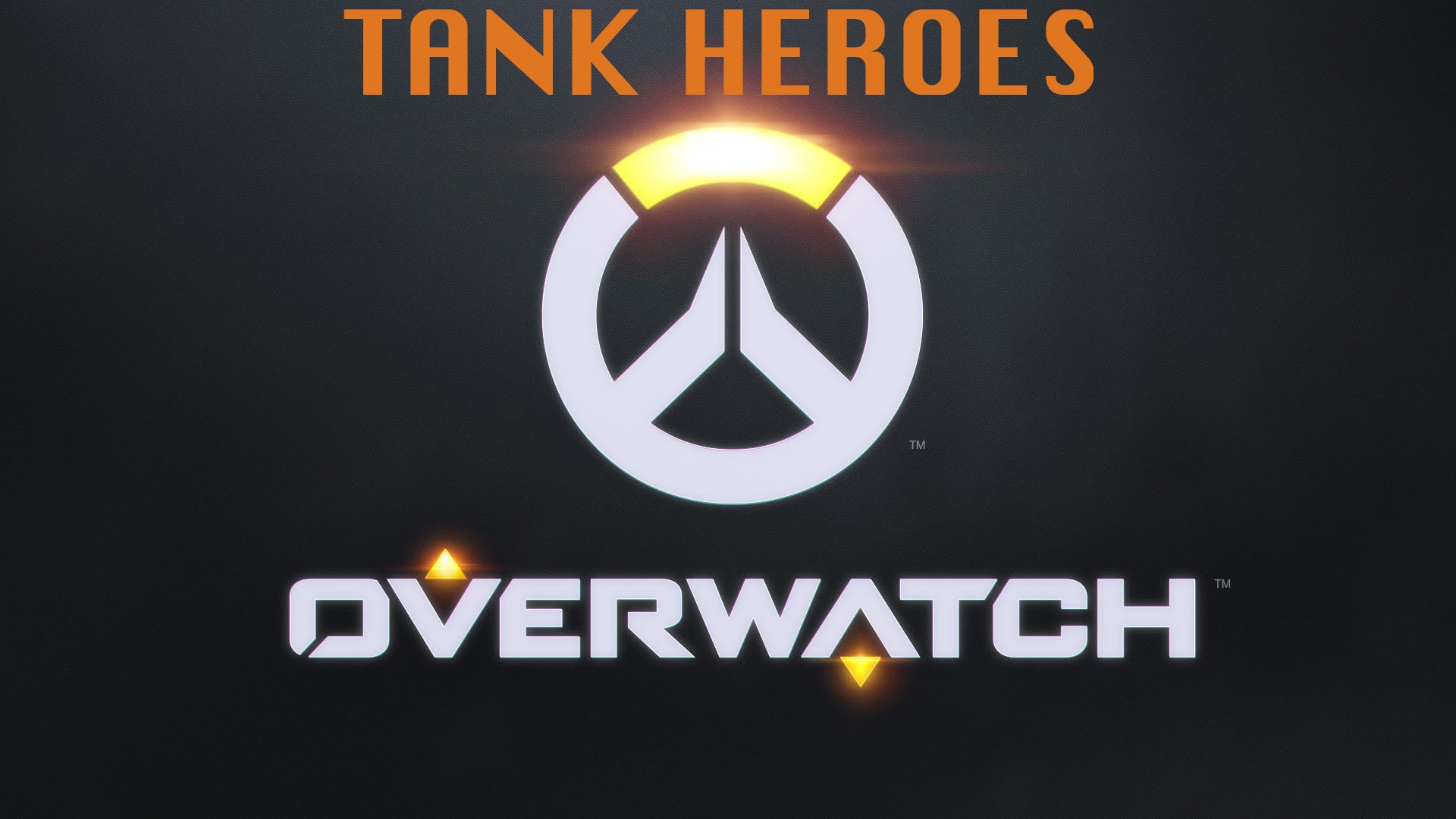 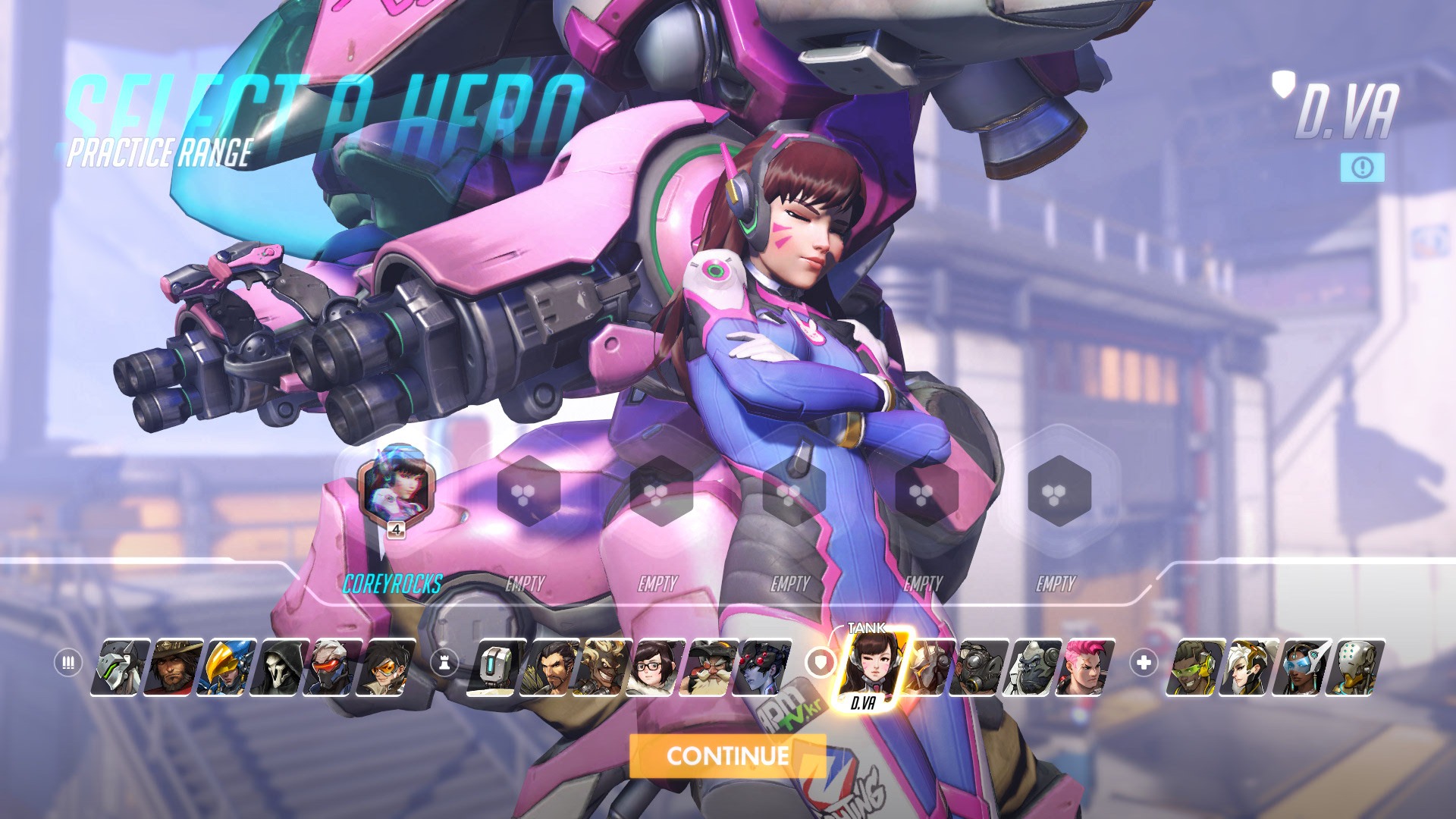 D.VA is a former pro gamer who now pilots a state of the art mech in defense of her homeland. D.Va’s mech is nimble and powerful—its twin Fusion Cannons blast away with autofire at short range, and she can use its Boosters to barrel over enemies and obstacles, or deflect attacks with her projectile-dismantling Defense Matrix. D.VA has a powerful short range weapons, and an Ultimate skill that can clear out an entire room in one blast. Some other plusses are thank D.VA has tons of health, plus when he machine dies, she jumps out and is still alive until she dies again (or until she gets he ultimate and can call her machin / mech down again and climb right back in). D.VA does have a very short range and poor mobility, which can be alleviated by short use of her boosters. 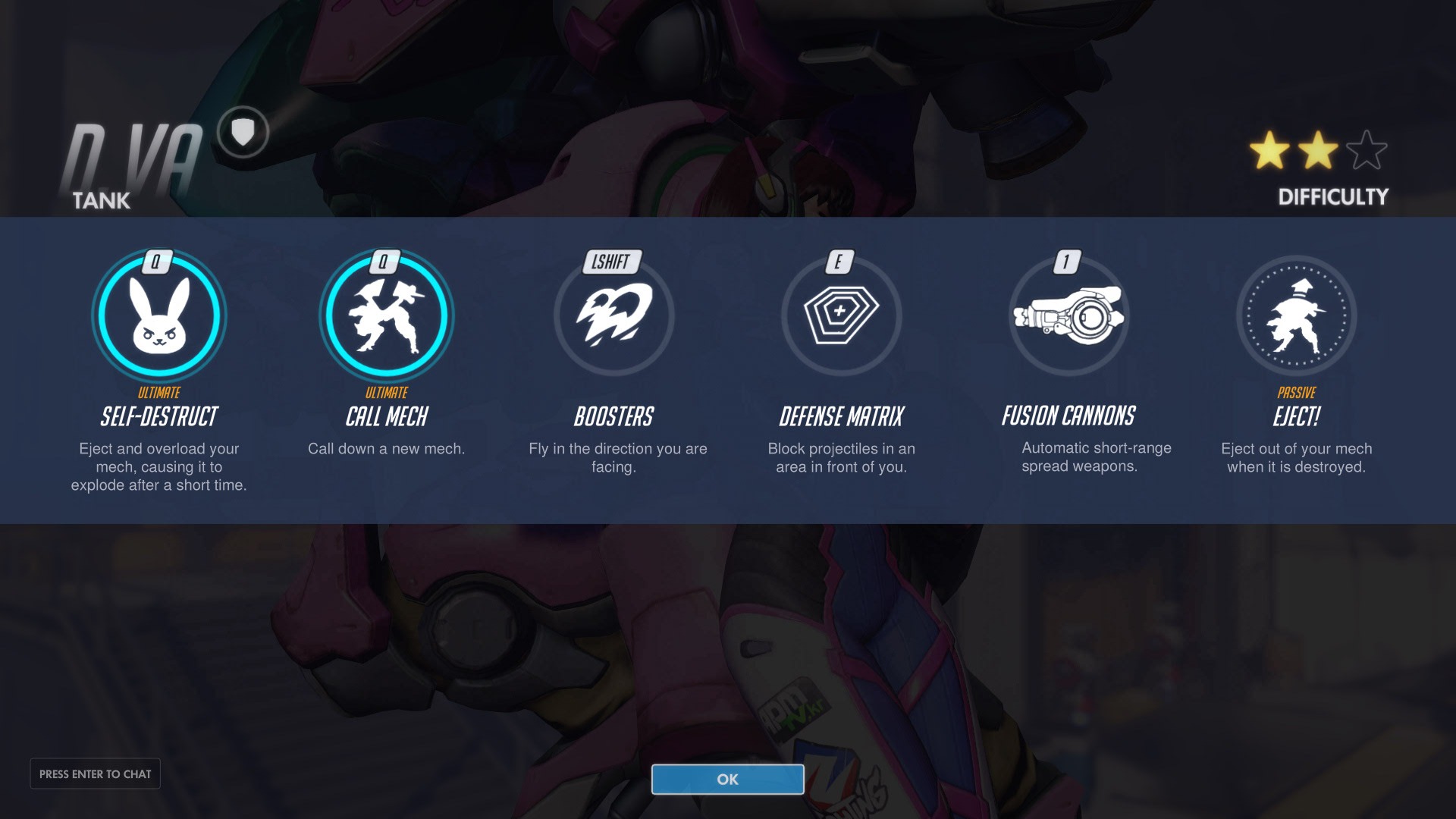 D.Va’s mech is equipped with twin short-range rotating cannons. They lay down continuous, high-damage fire without needing to reload, but slow D.Va’s movement while they’re active.

While outside of her mech, D.Va can continue the fight with a mid-range automatic blaster.

D.Va’s mech launches into the air, her momentum carrying her forward. She can turn and change directions or barrel through her enemies, knocking them back.

D.Va can activate this forward-facing targeting array to shoot incoming projectiles out of the air.

D.Va ejects from her mech and sets its reactor to explode, dealing massive damage to nearby opponents.

If her armored battle suit is destroyed, D.Va can call down a fresh mech and return to the fray. 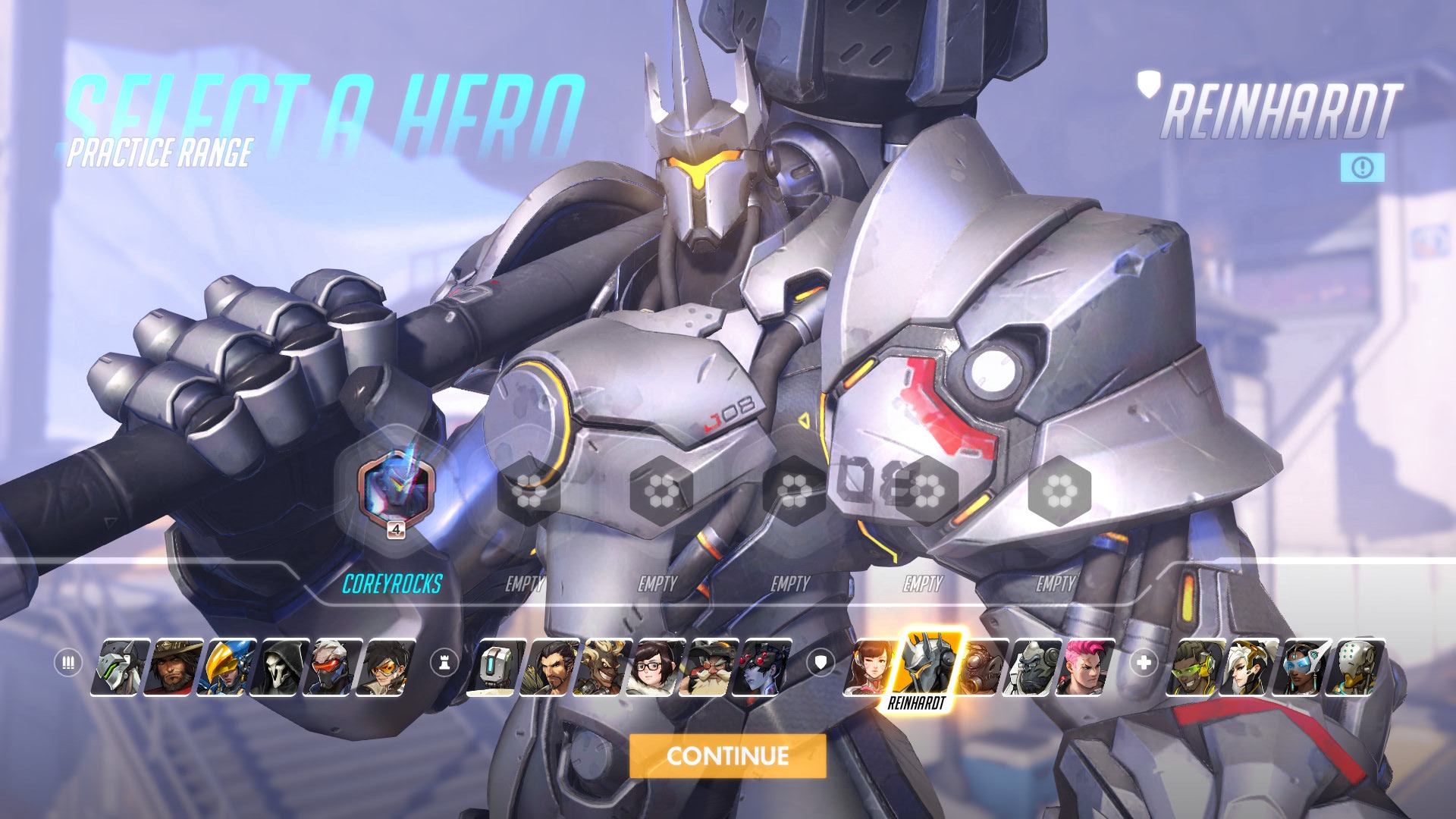 Reinhardt is a champion of a bygone age, who lives by the knightly codes of valor, justice and courage. Clad in powered armor and swinging his hammer, Reinhardt leads a rocket-propelled charge across the battleground and defends his squadmates with a massive energy barrier.

He is a melee focussed tank. Reinhardt has a huge hammer that not only deals good damage, but actually knocks targets around when hit. His most useful skill however is the massive shield he can deploy, that blocks all damage and can protect an entire team from countless bullets, rockets and explosions. Great at pushing an objective, or just being a nuisance, Reinhardt can fit in on almost any team. He can get stuck though when facing long range opponents with absolutely no way of attacking them and being very slow. 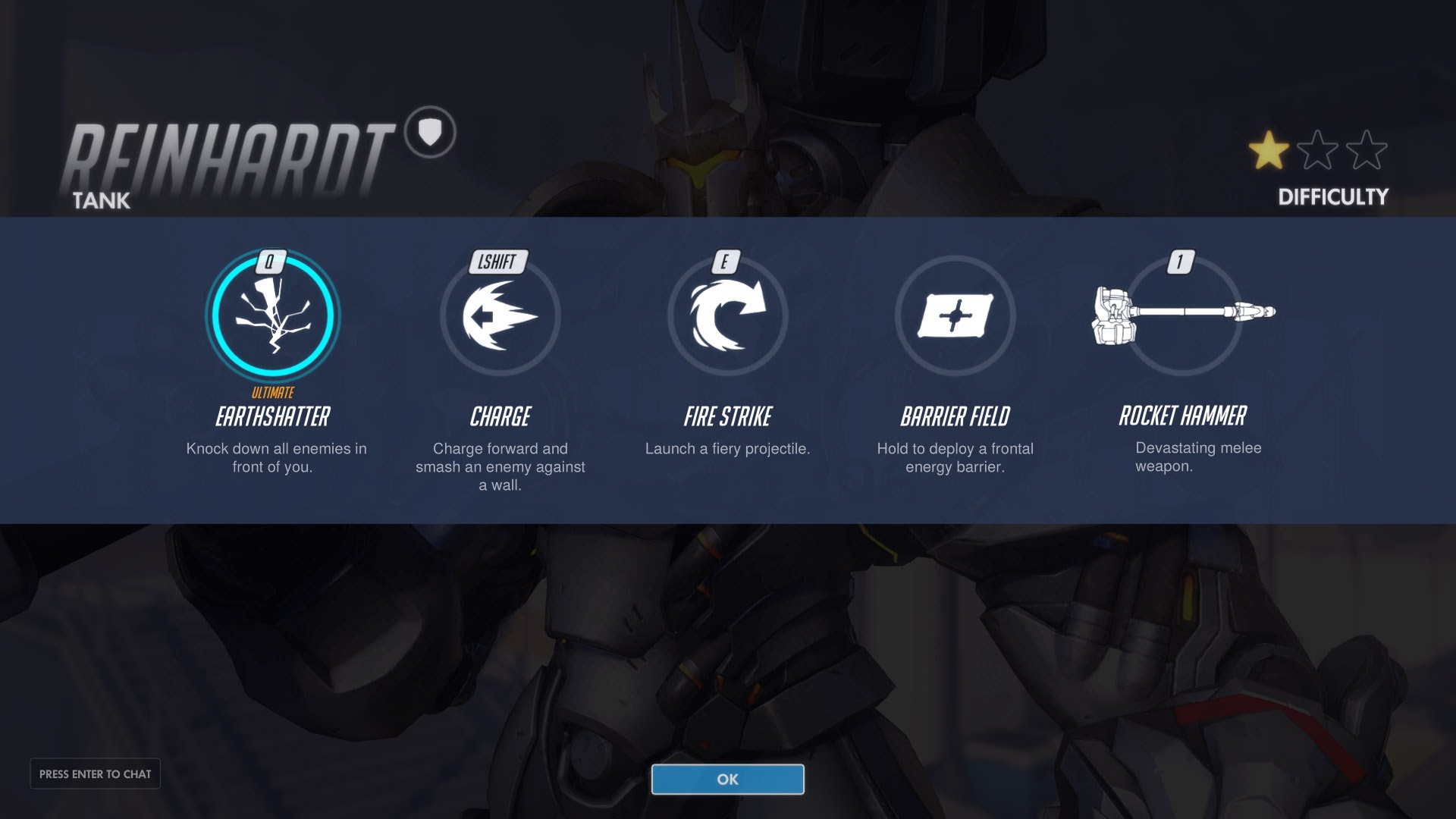 Reinhardt’s Rocket Hammer is an exemplary melee weapon, able to deal punishing damage in a wide arc with every swing.

Reinhardt projects a broad, forward-facing energy barrier, which can absorb substantial damage before it is destroyed. Though Reinhardt can protect himself and his companions behind the barrier, he cannot attack while sustaining it.

Reinhardt charges forth in a straight line, pinning the first enemy in his path and knocking others aside. If he collides with a wall, the foe he’s carrying suffers extreme damage.

By whipping his Rocket Hammer forward, Reinhardt slings a flaming projectile which pierces and damages any enemies it touches.

Reinhardt forcefully slams his Rocket Hammer into the ground, knocking down and damaging all enemies in front of him. 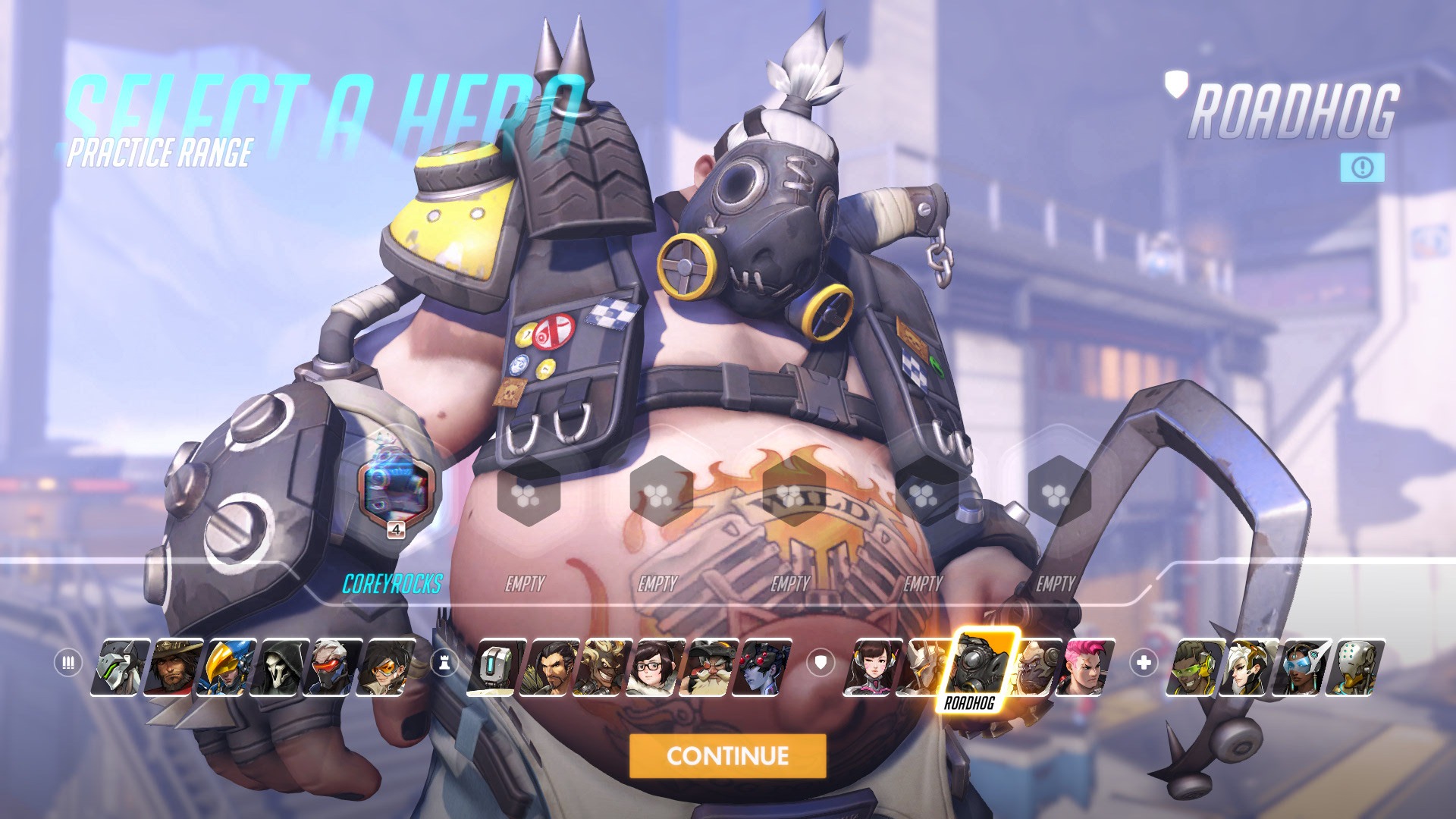 Roadhog is a ruthless killer with tremendous strength and a reputation for cruelty and wanton destruction. Roadhog uses his signature Chain Hook to pull his enemies close before shredding them with blasts from his Scrap Gun. He’s hardy enough to withstand tremendous damage, and can recover his health with a short breather.

With very powerful close range abilities and the ability to pull enemies towards him using his chain hook, Roadhog can be best used to pull those enemies right into the middle of your team for a quick kill. Use Roadhog to suck in as much damage as possible and pull those enemies in for quick close range kills. 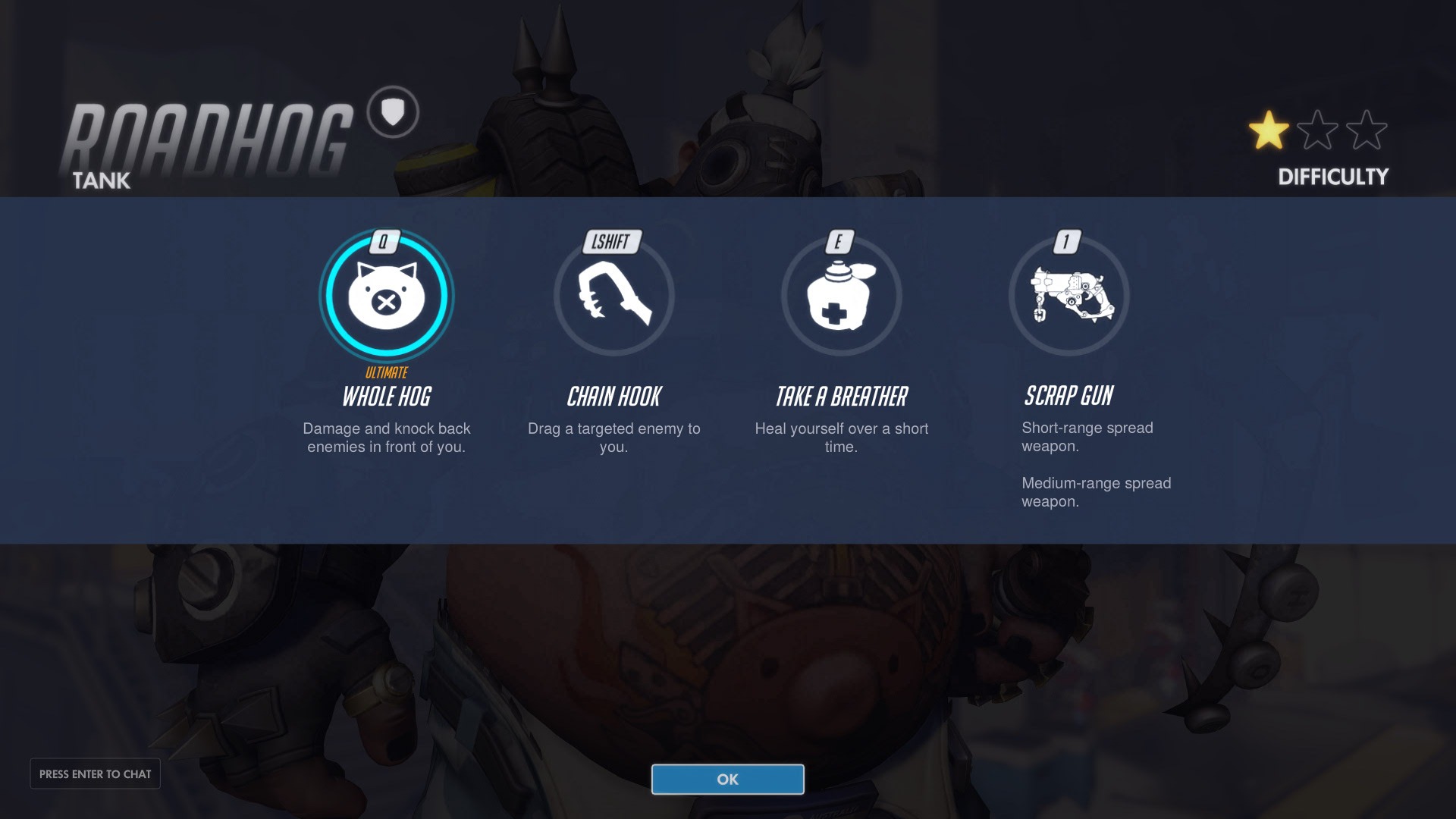 Roadhog’s Scrap Gun fires short-range blasts of shrapnel with a wide spread. Alternatively, it can launch a shrapnel ball that detonates farther away, scattering metal fragments from the point of impact.

Roadhog restores a chunk of his health over a brief period of time.

Roadhog hurls his chain at a target; if it catches, he yanks them into close range.

After cramming a top-loader onto his Scrap Gun, Roadhog pours in ammo. For a short time, he can crank out a stream of shrapnel that knocks back enemies. 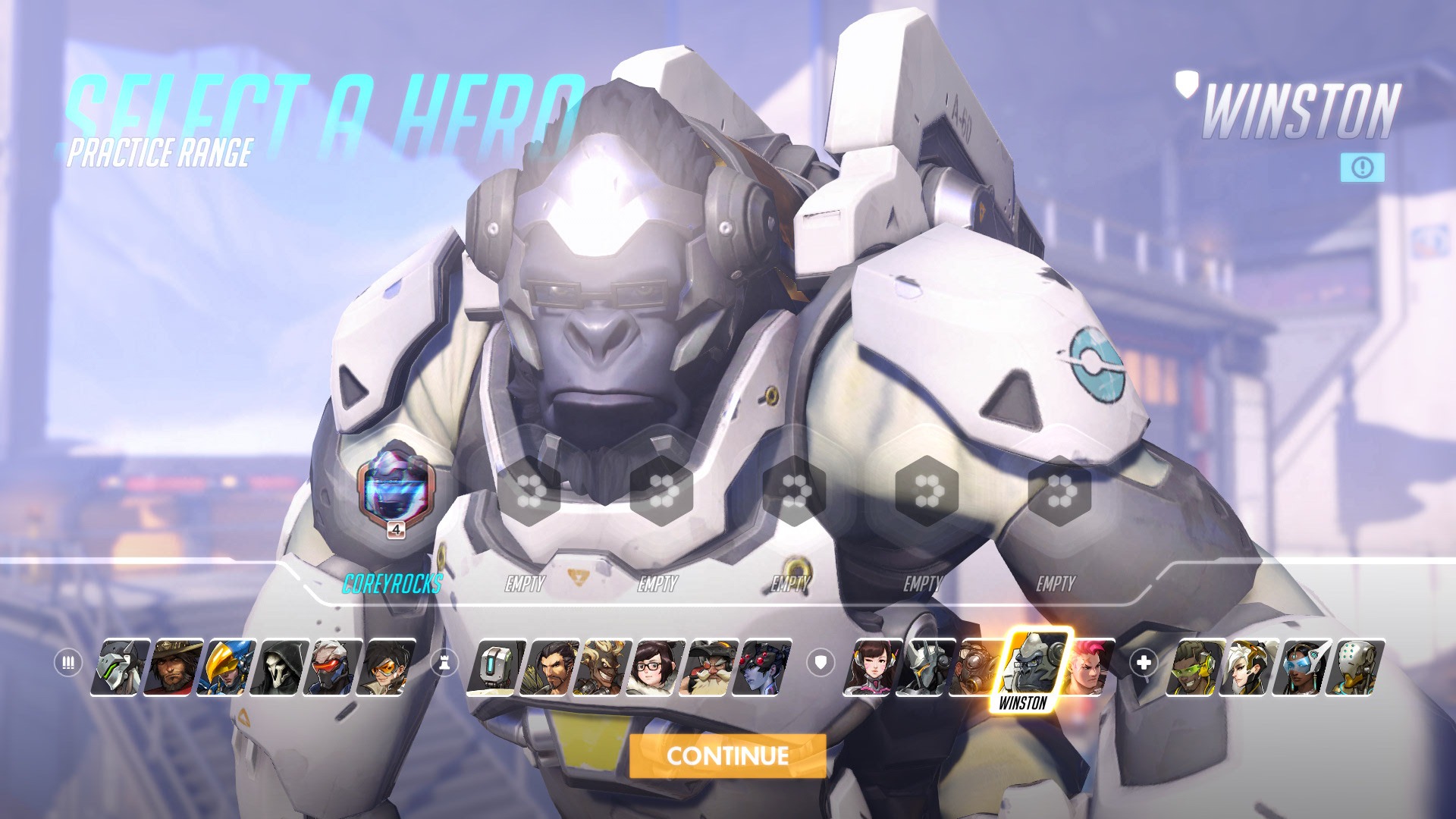 Winston is a super intelligent, genetically engineered gorilla, scientist and champion for humanity’s potential. Winston wields impressive inventions—a jump pack, electricity-blasting Tesla Cannon, portable shield projector and more—with literal gorilla strength. Winston is a typical Tank, with a ton of health and a shield that can be deployed to protect his allies. His main weapon is a close range tesla cannon, and he is able to leap to his enemies, smashing into them and slowing them down. He is great offensively and defensively, and is perhaps the best character in the game for leaping into the middle of a group of enemies and causing mayhem. Like most of the tanks his downside is range and he must leap towards targets to get close. 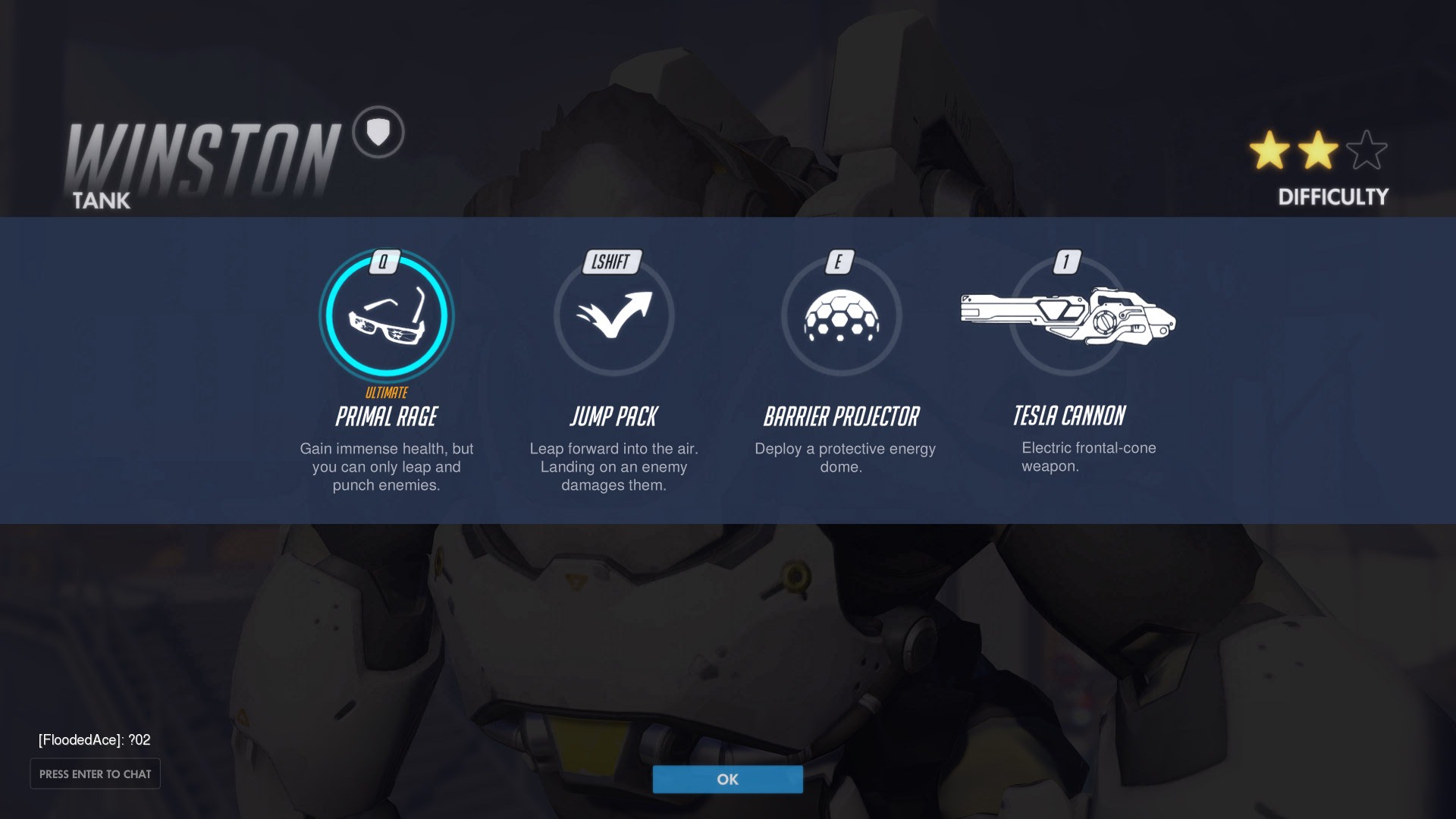 Winston’s weapon fires a short-range electric barrage for as long as he holds down the trigger.

Assisted by his energy pack, Winston lunges through the air, dealing significant damage and staggering nearby enemies when he lands.

Winston’s barrier projector extends a bubble-shaped field that absorbs damage until it’s destroyed. Allies protected by the barrier can return fire from within it.

Winston embraces his animal nature, significantly boosting his health and making him very difficult to kill, strengthening his melee attack, and allowing him to use his Jump Pack ability more frequently. While raging, Winston can only make melee and Jump Pack attacks. 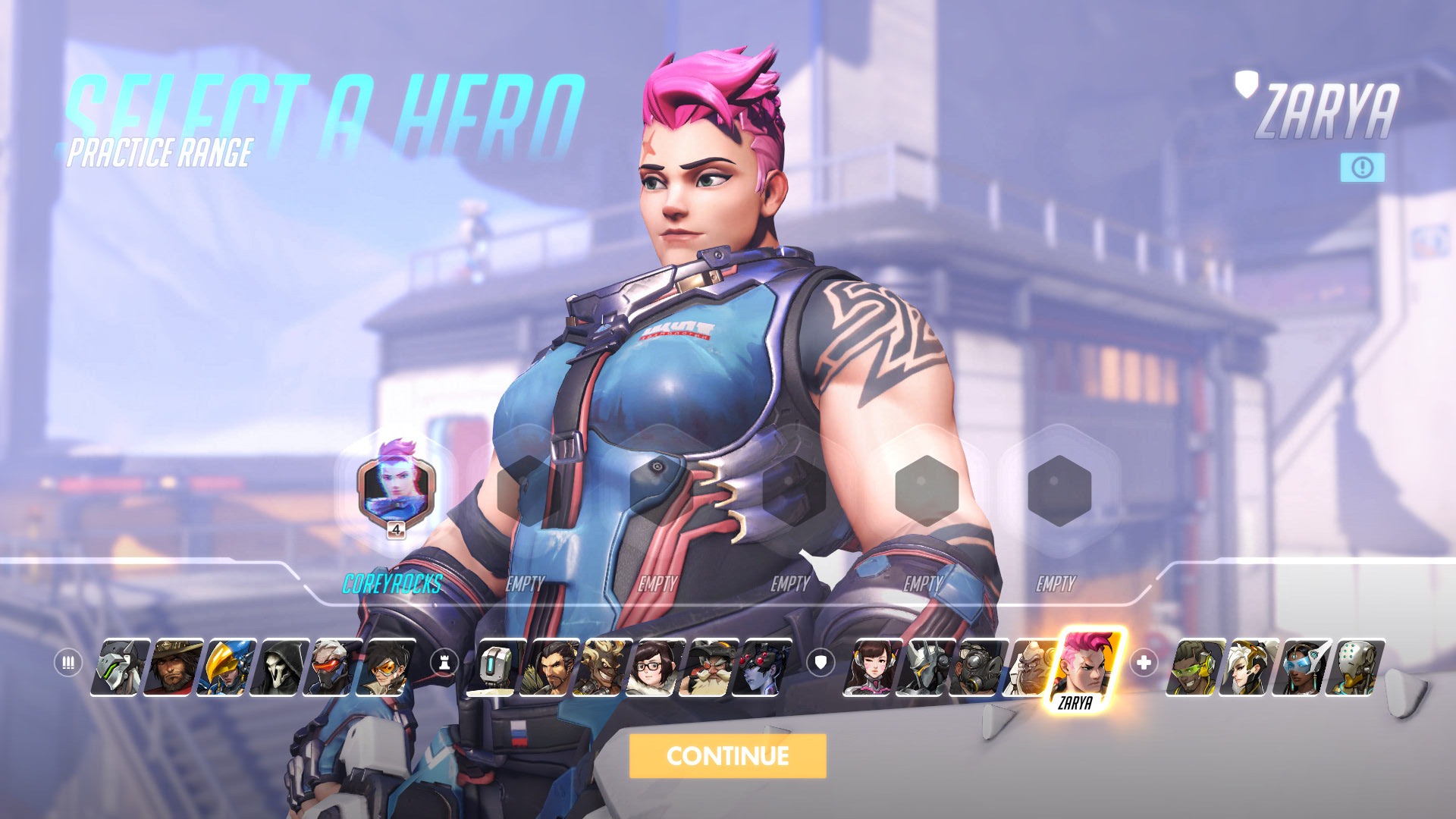 Zarya is one of the world’s strongest women who sacrificed personal glory to protect her country. Deploying powerful personal barriers that convert incoming damage into energy for her massive Particle Cannon, Zarya is an invaluable asset on the front lines of any battle. Zarya focuses heavily on defensive abilities. Her main weapon is a short range cannon, firing a continuous beam of energy. She can also project shields around either herself or an ally, that absorbs all incoming damage and makes her own weapon stronger. Finally, her ultimate allows her to trap several enemies at once, and can be used in combination with many other characters to guarantee many kills. Zarya is a very much situational character that when used right, is very powerful. 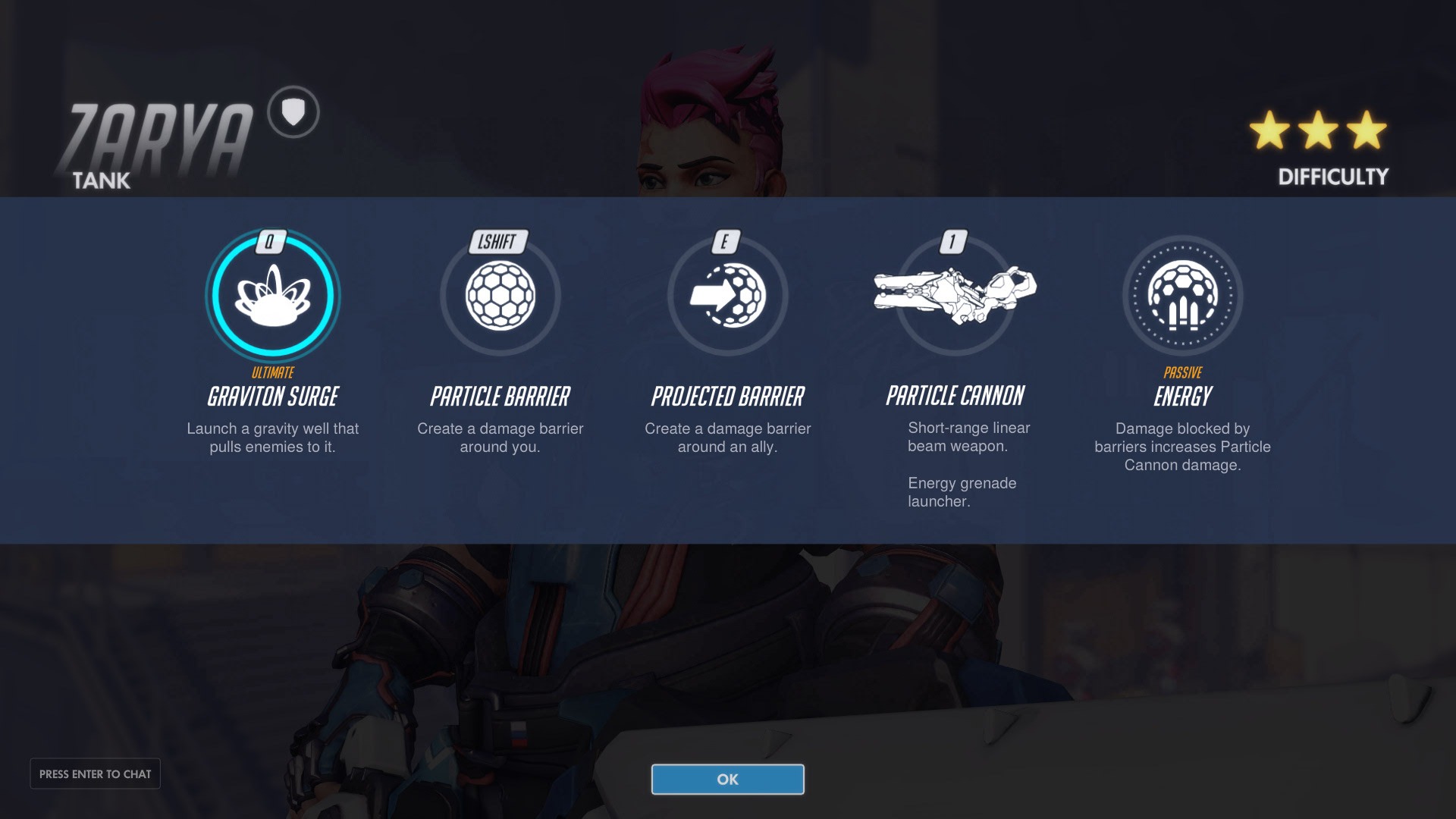 The Particle Cannon can emit a personal barrier that shields Zarya against incoming attacks, redirecting their energy to enhance her weapon’s damage and the width of its beam.

Zarya surrounds one of her teammates with an energy barrier that simultaneously absorbs fire and boosts the power of her Particle Cannon.

Zarya launches a gravity bomb that draws in enemy combatants and deals damage while they’re trapped.