If you see yourself as a hero that try to best control the battlefield by interrupting enemy attacks by fortifying locations and stopping the enemies attacks from hunting your team mates, then you may want to try out being a defense hero in Overwatch.

Defensive heroes are generally less mobile than the offensive ones, but they specialize in guarding locations and splitting up the enemy teams or making them pay. In exchange for the lack in mobility for most defensive heroes, some are able to lay devastating traps, build powerful turrets, reveal enemies to team mates and even alter the drain of the battlefield itseld. 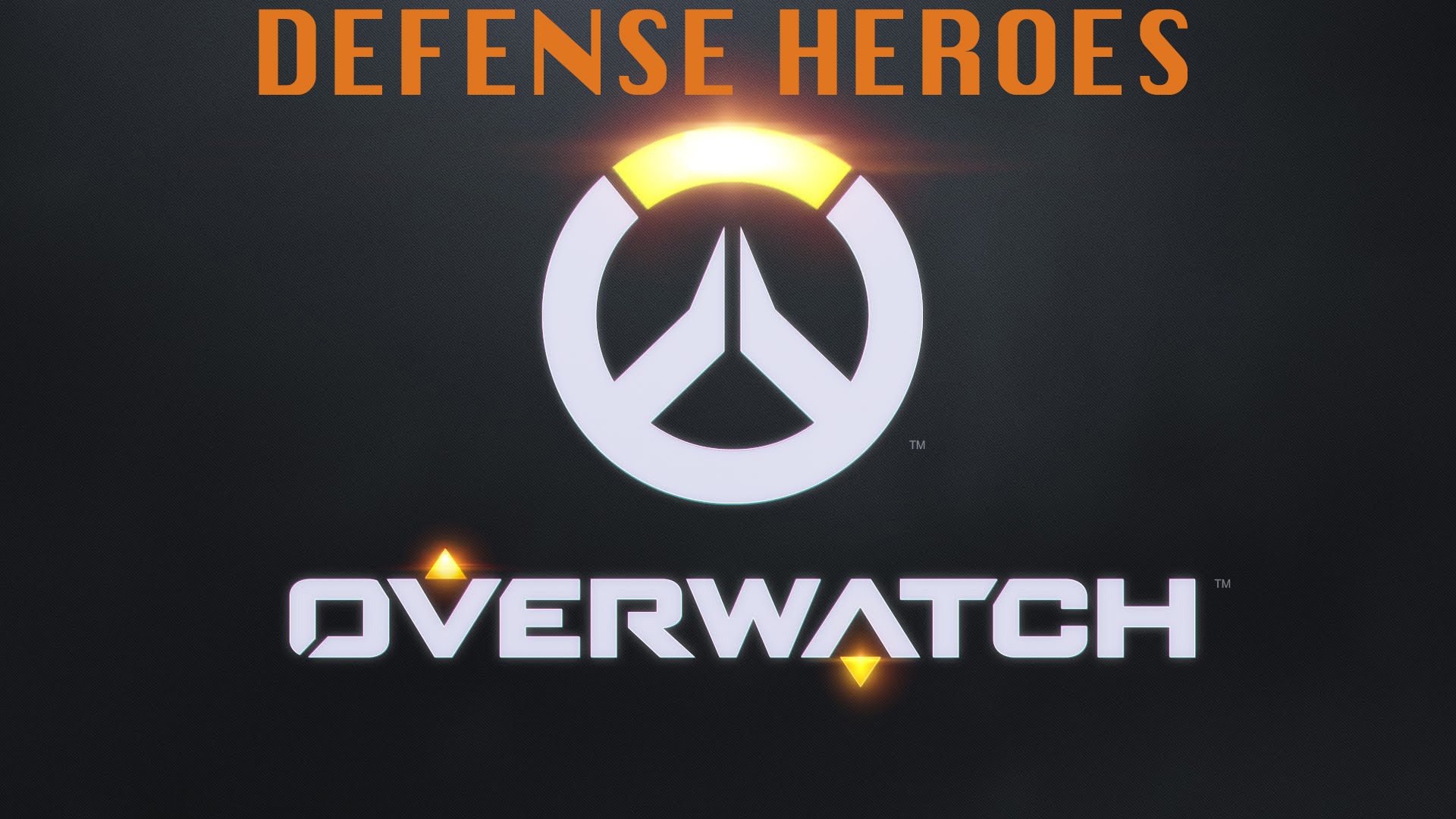 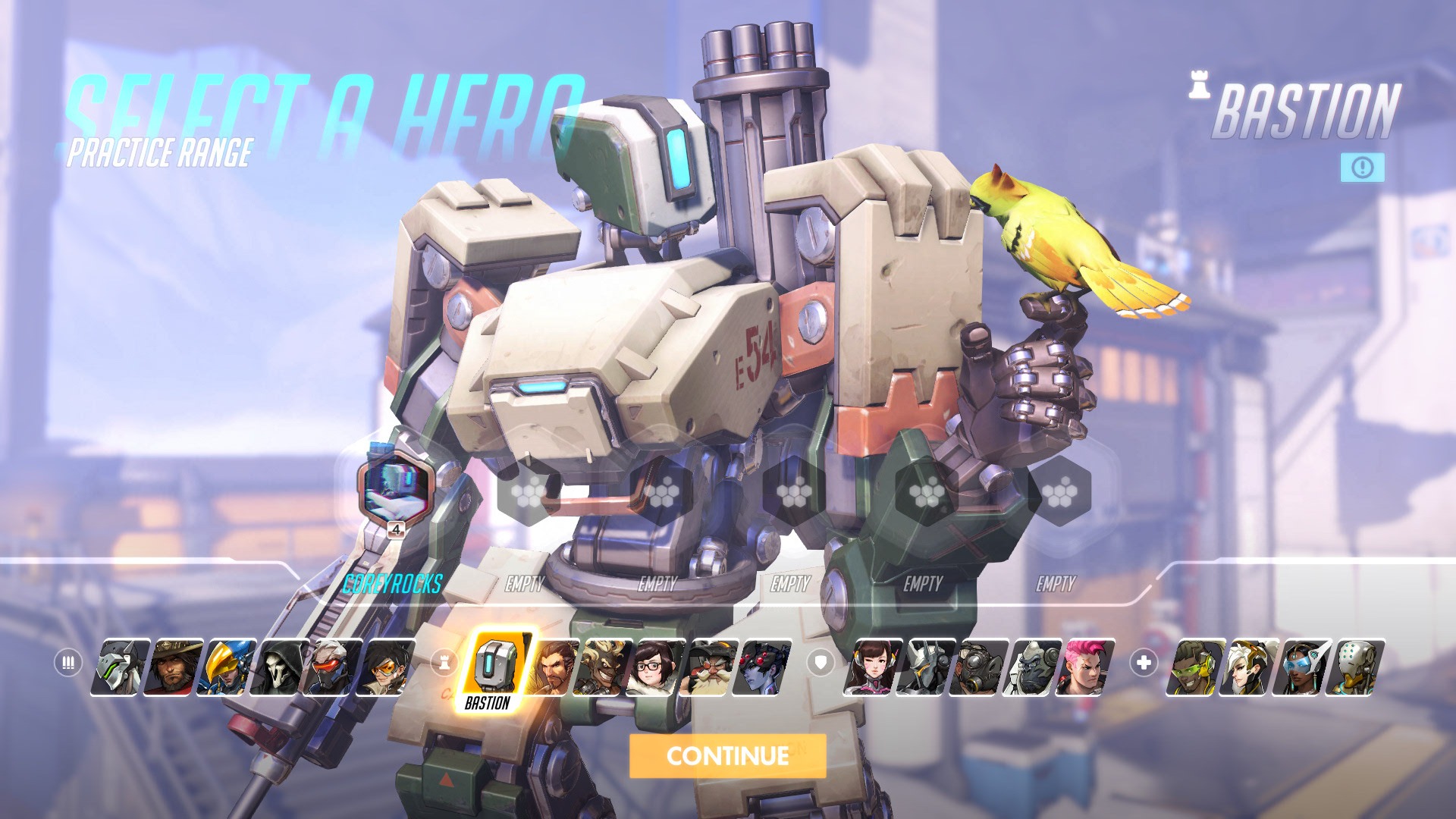 Bastion is a transforming robot who explored the world; fascinated by nature, but wary of humanity. Repair protocols and the ability to transform between stationary Assault, mobile Recon and devastating Tank configurations provide Bastion with a high probability of victory. Bastion is designed to lock down an area with his turret form. He can dish out insane amounts of damage, but only while stationary, leaving him extremely vulnerable to attacks from behind.

Bastion is best used when there are a limited numbers of entrances to an area (like small hallways) and he has extremely high damage when in Turret form, that can even easily take out Tanks. 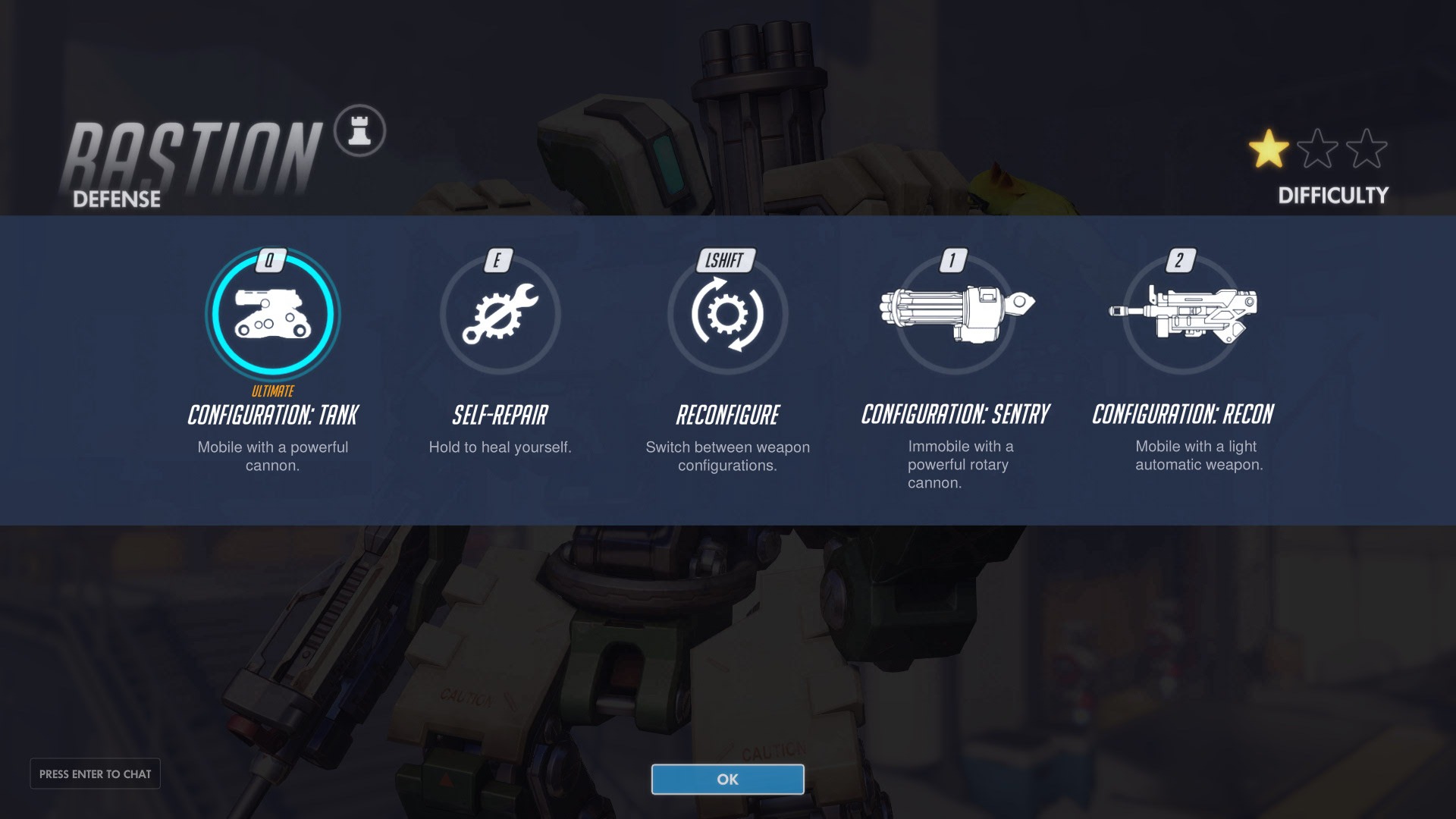 In Recon mode, Bastion is fully mobile, outfitted with a submachine gun that fires steady bursts of bullets at medium range.

In Sentry mode, Bastion is a stationary powerhouse equipped with a gatling gun capable of unleashing a hail of bullets. The gun’s aim can be “walked” across multiple targets, dealing devastating damage at short to medium range.

Bastion transforms between its two primary combat modes to adapt to battlefield conditions.

Bastion restores its health; it cannot move or fire weapons while the repair process is in effect.

In Tank mode, Bastion extends wheeled treads and a powerful long-range cannon. The cannon’s explosive shells demolish targets in a wide blast radius, but Bastion can only remain in this mode for a limited time. 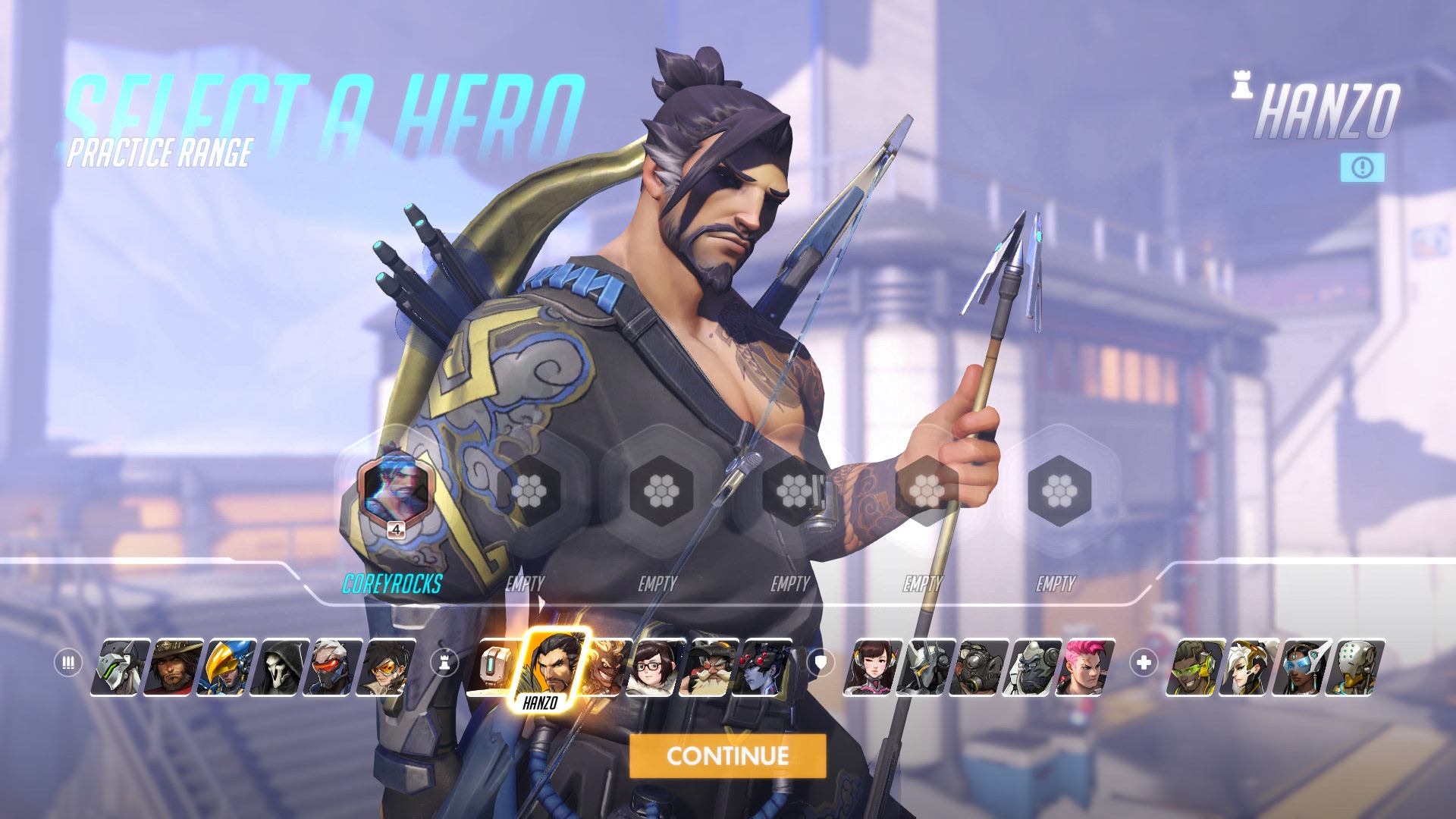 Hanzo is a lethal bowman and assassin without peer. Hanzo’s versatile arrows can reveal his enemies or fragment to strike multiple targets. He can scale walls to fire his bow from on high, or summon a titanic spirit dragon. Hanzo uses his bow and arrow to strike at enemies from a long range. He excels at defense, where he can hunker down and stay hidden, covering a specific area with his rain of arrows. Where Hanzo doesn’t excel is in close quarters and in fast combat, you also need to charge his arrows to have them do effective damage. 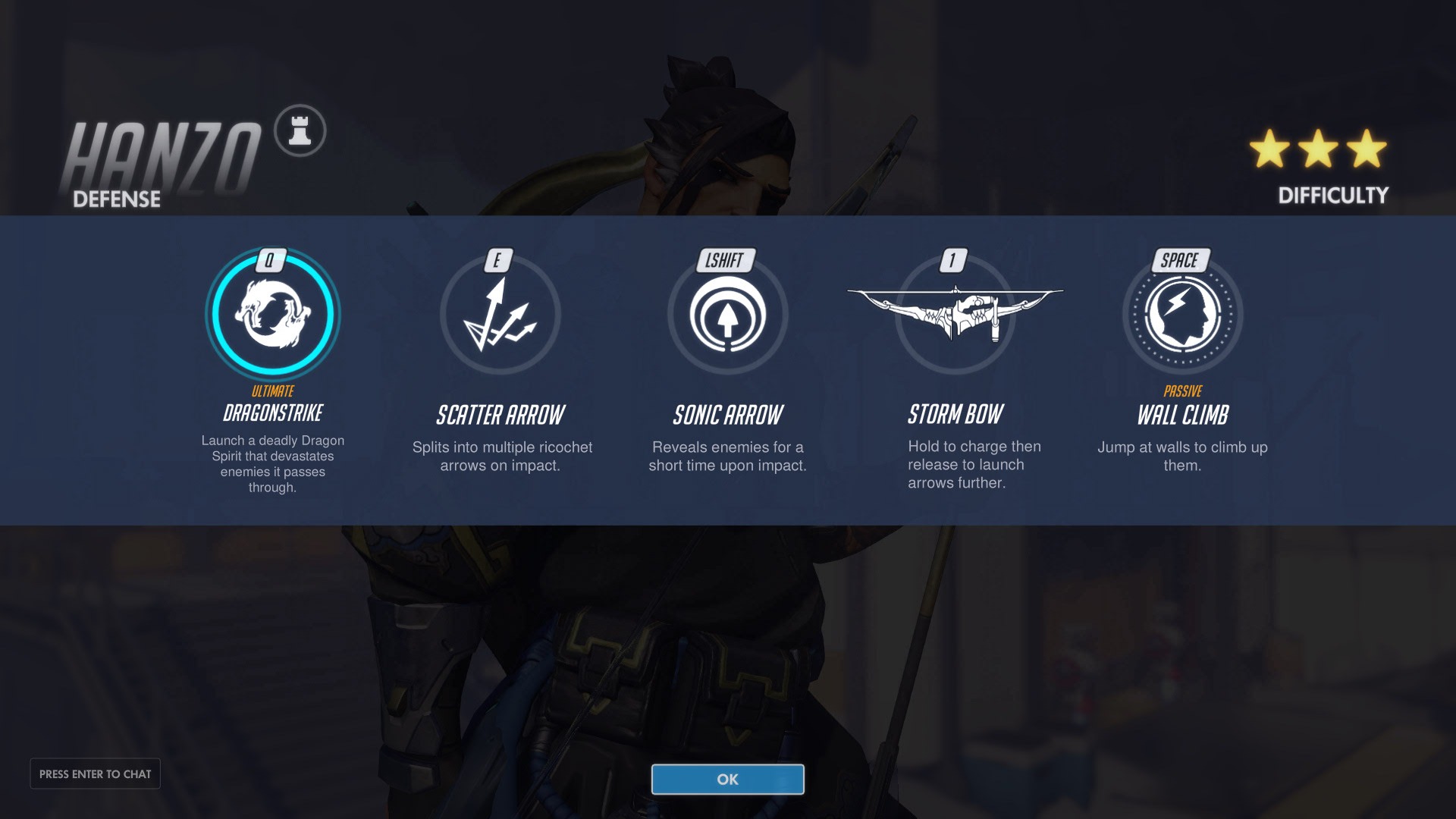 Hanzo nocks and fires an arrow at his target.

Hanzo launches an arrow that contains a sonar tracking device. Any enemy within its detection radius is visibly marked, making them easier for Hanzo and his allies to hunt down.

Hanzo shoots a fragmenting arrow that ricochets off walls and objects and can strike multiple targets at once.

Hanzo summons a Spirit Dragon which travels through the air in a line. It passes through walls in its way, devouring any enemies it encounters. 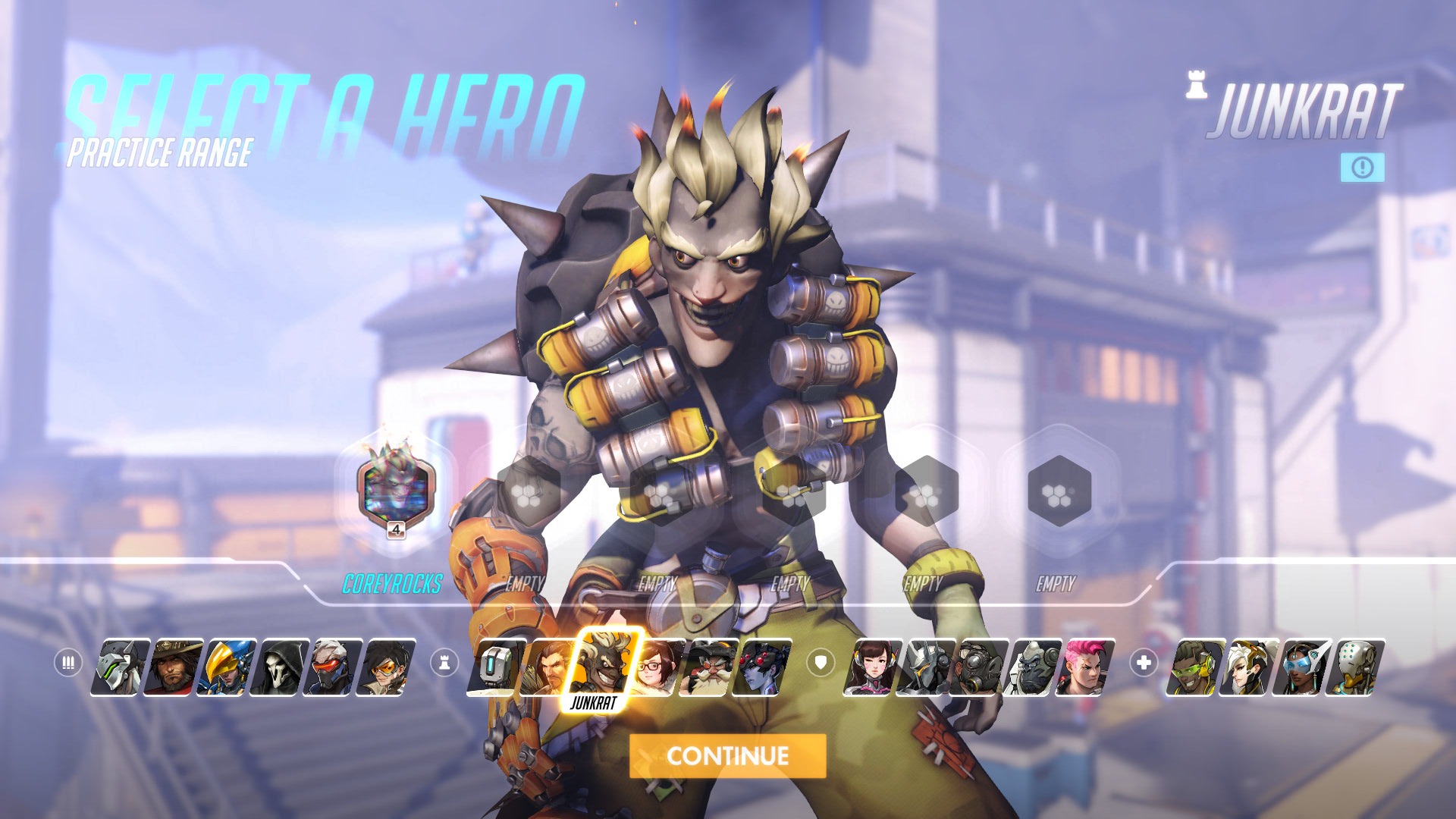 Junkrat is an explosives-obsessed freak who lives to cause chaos and destruction. Junkrat’s area-denying armaments include a Frag Launcher that lobs bouncing grenades, Concussion Mines that send enemies flying, and Steel Traps that stop foes dead in their tracks.

He is best at locking down one area as he can place bombs and traps in that area and has a very powerful ultimate ability that detonates a bomb. The only downside to Junkrat though is that he isn’t the greatest for one on one combat as his grenade launcher is slow and he has lower health. 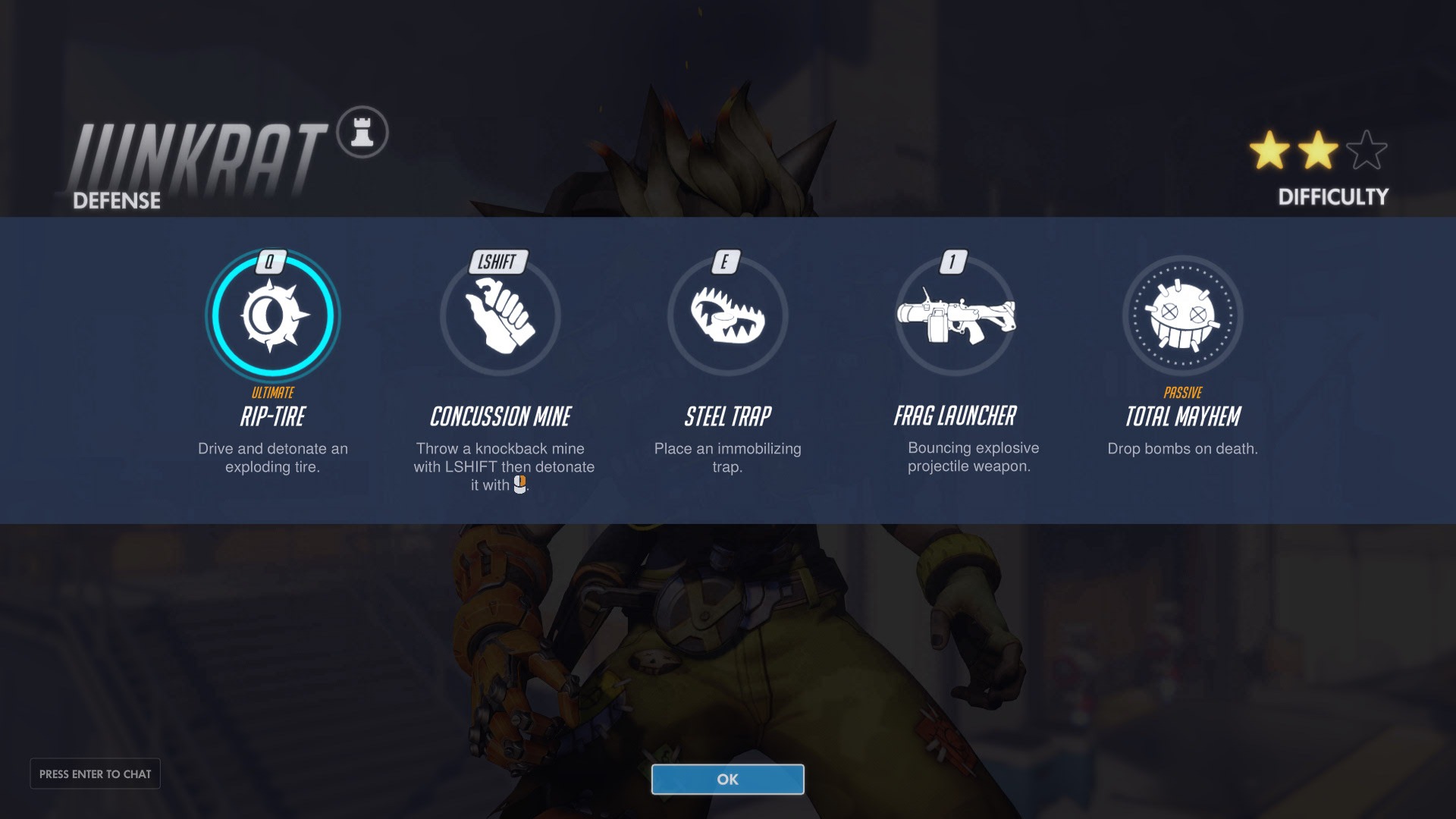 Junkrat’s Frag Launcher lobs grenades a significant distance. They bounce to reach their destination, and blow up when they strike an enemy.

After placing one of his homemade Concussion Mines, Junkrat can trigger it to damage enemies and send them flying… or propel himself through the air.

Junkrat tosses out a giant, metal-toothed trap. Should an enemy wander too close to the trap, it clamps on, injuring and immobilizing them.

Junkrat’s deranged sense of humor persists past his death. If killed, he drops several live grenades.

Junkrat revs up a motorized tire bomb and sends it rolling across the battlefield, climbing over walls and obstacles. He can remotely detonate the RIP-Tire to deal serious damage to enemies caught in the blast, or just wait for it to explode on its own. 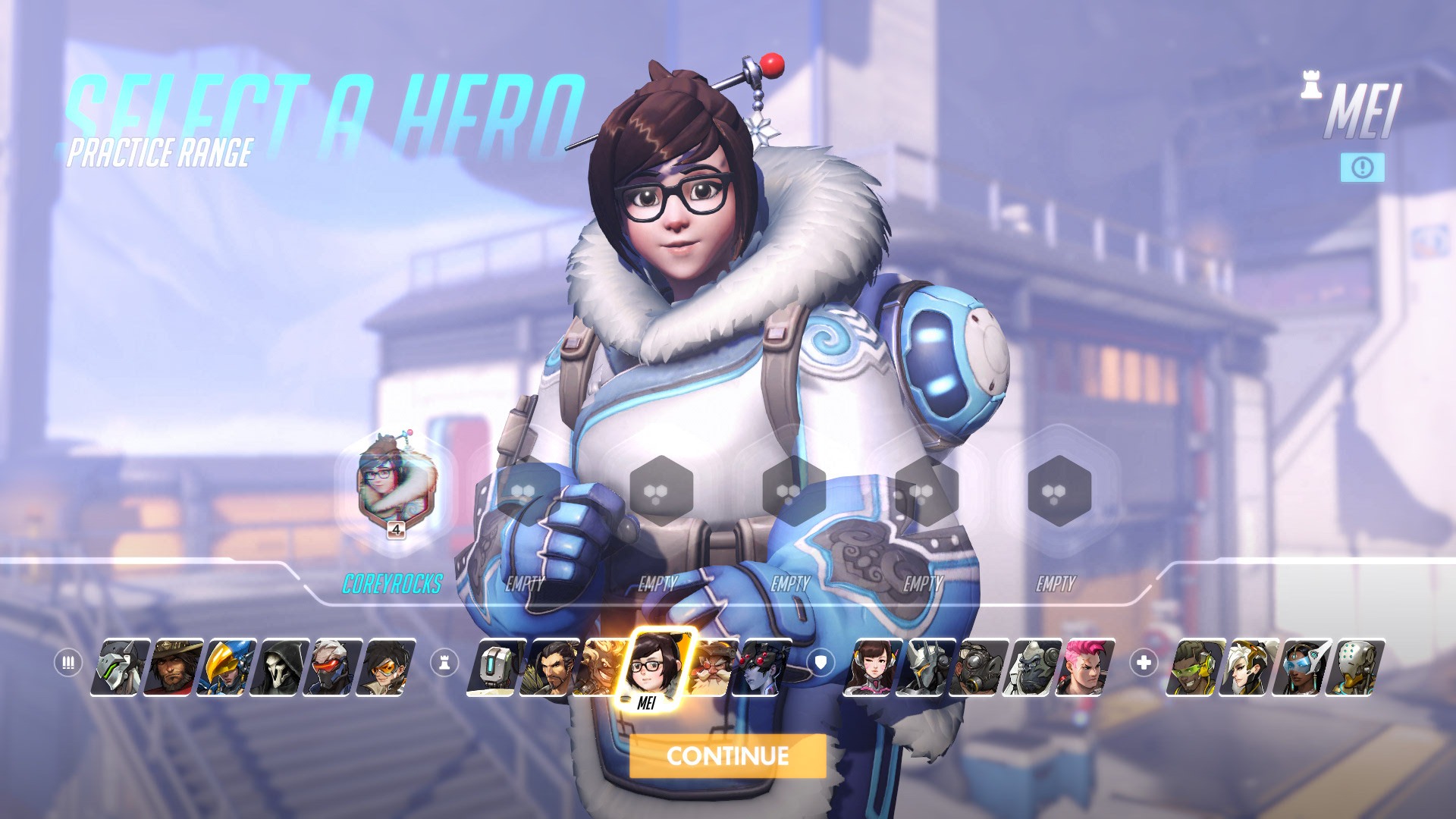 MEI is a specialist in weather manipulation who has taken up the fight to preserve the environment.Mei’s weather-altering devices slow opponents and protect locations. Her Endothermic Blaster unleashes damaging icicles and frost streams, and she can Cryo-Freeze herself to guard against counterattacks, or obstruct the opposing team’s movements with an Ice Wall.

MEI uses her ice and snow to slow down the enemy or even freeze them. There are some downsides to using MEI though as she has slow speed and an over all lack of purposeful damage from her gun. MEI is best used at stalling and slowing down enemies. 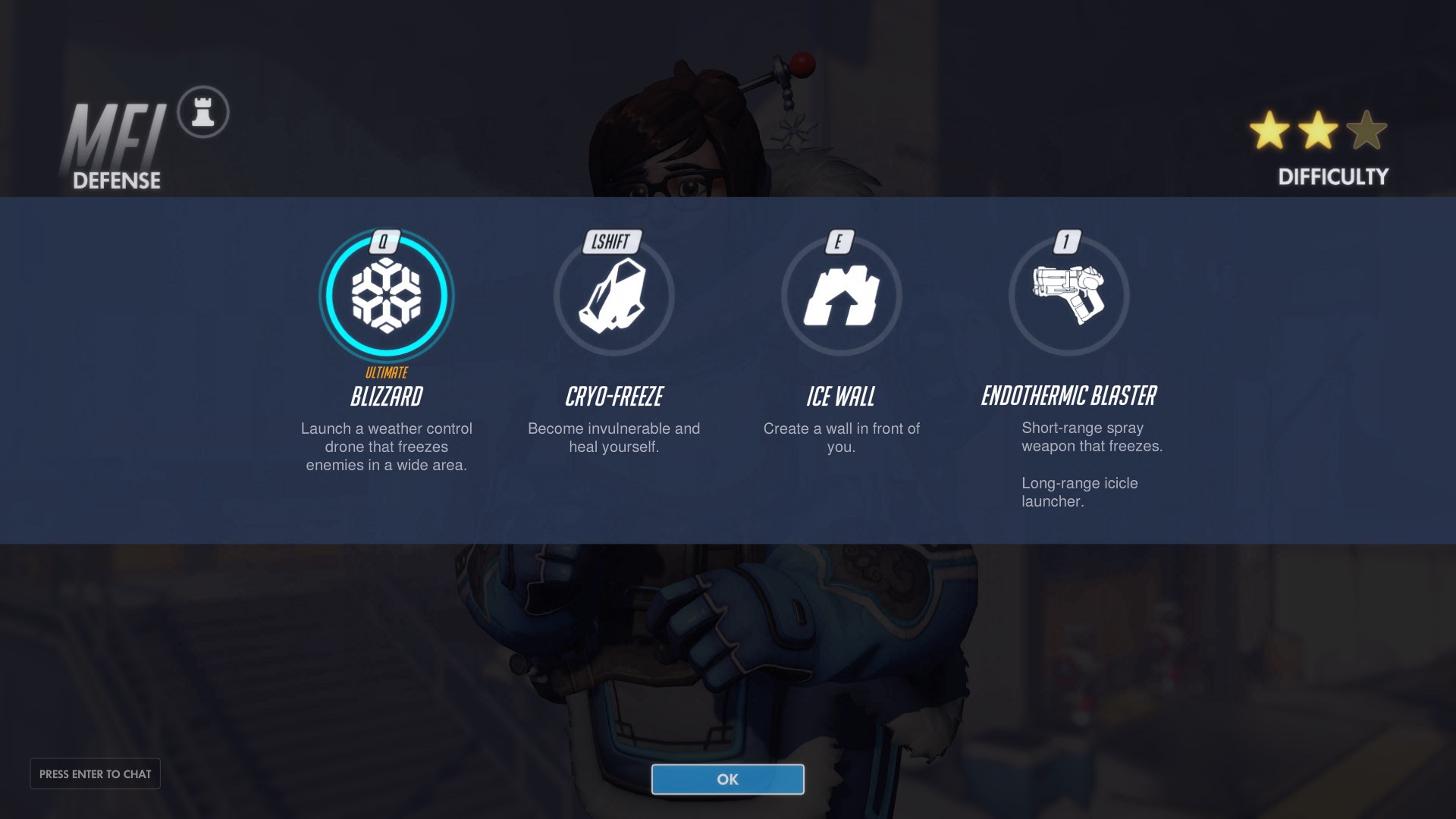 Mei’s blaster unleashes a concentrated, short-range stream of frost that damages, slows, and ultimately freezes enemies in place. Mei can also use her blaster to shoot icicle-like projectiles at medium range.

Mei instantly surrounds herself with a block of thick ice. She heals and ignores damage while encased, but cannot move or use abilities.

Mei deploys a weather-modification drone that emits gusts of wind and snow in a wide area. Enemies caught in the blizzard are slowed and take damage; those who linger too long are frozen solid. 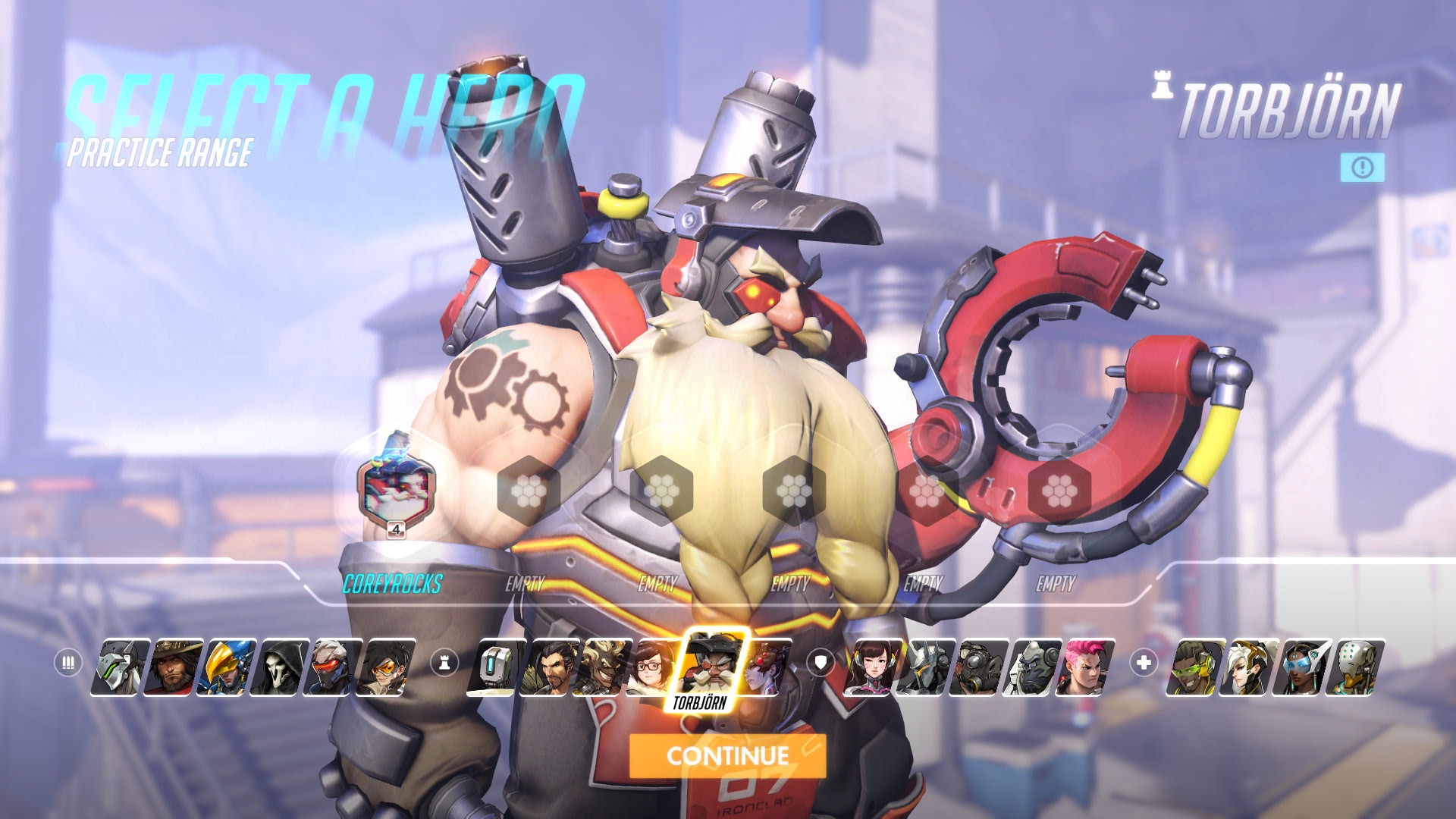 Torbjorn is an ingenious engineer who forgers systems on the battlefield. Torbjörn’s extensive arsenal includes a rivet gun and hammer, as well as a personal forge that he can use to build upgradeable turrets and dole out protective armor packs.

If you are looking for the best or truest of all defense heroes, Torbjorn is it. He can build  turret and place it anywhere, which makes it an insanely good defense tool as you can just rebuild it after it gets destroyed. Torbjorn can further help his allies by giving them defense buffs and a good short range weapon. Torbjorn must rely on his Turrent though for kills, which is both a strength and a weakness. 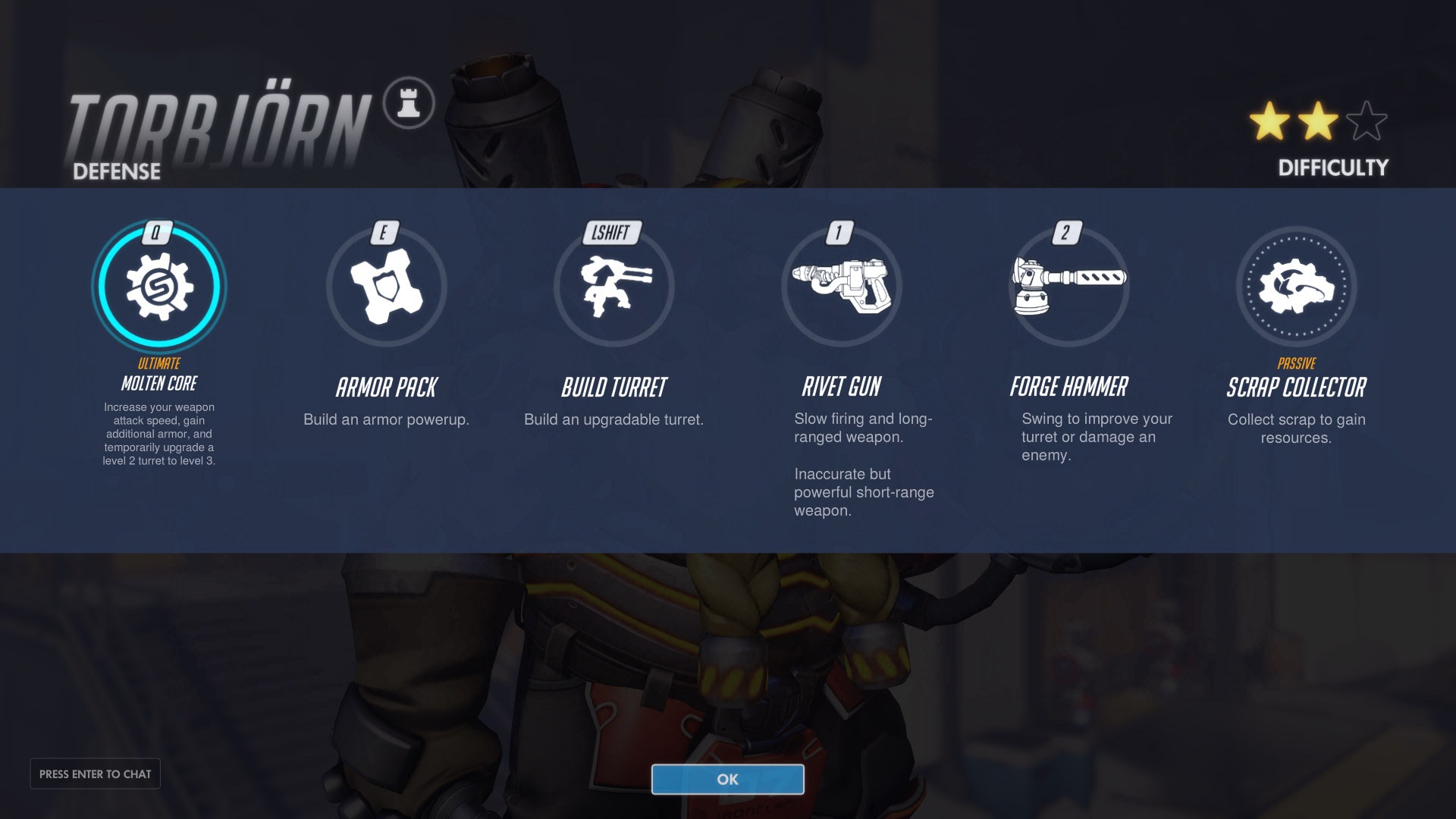 Torbjörn fires rivets at long range, or ejects molten metal from his gun in a short, close-range burst.

Torbjörn uses his multipurpose hammer to build, upgrade and repair turrets. In a pinch, it can also be swung as a weapon.

Torbjörn constructs an enemy-tracking autocannon. He can use the scrap he collects from dead enemies and allies to repair or upgrade it, increasing its health and adding a second cannon barrel and a rocket launcher.

Torbjörn deploys an armor upgrade; either he or his allies can pick it up to absorb some damage.

After overheating his personal forge, Torbjörn gains a significant amount of armor and scrap. He also attacks (and builds and repairs turrets) far faster than normal. 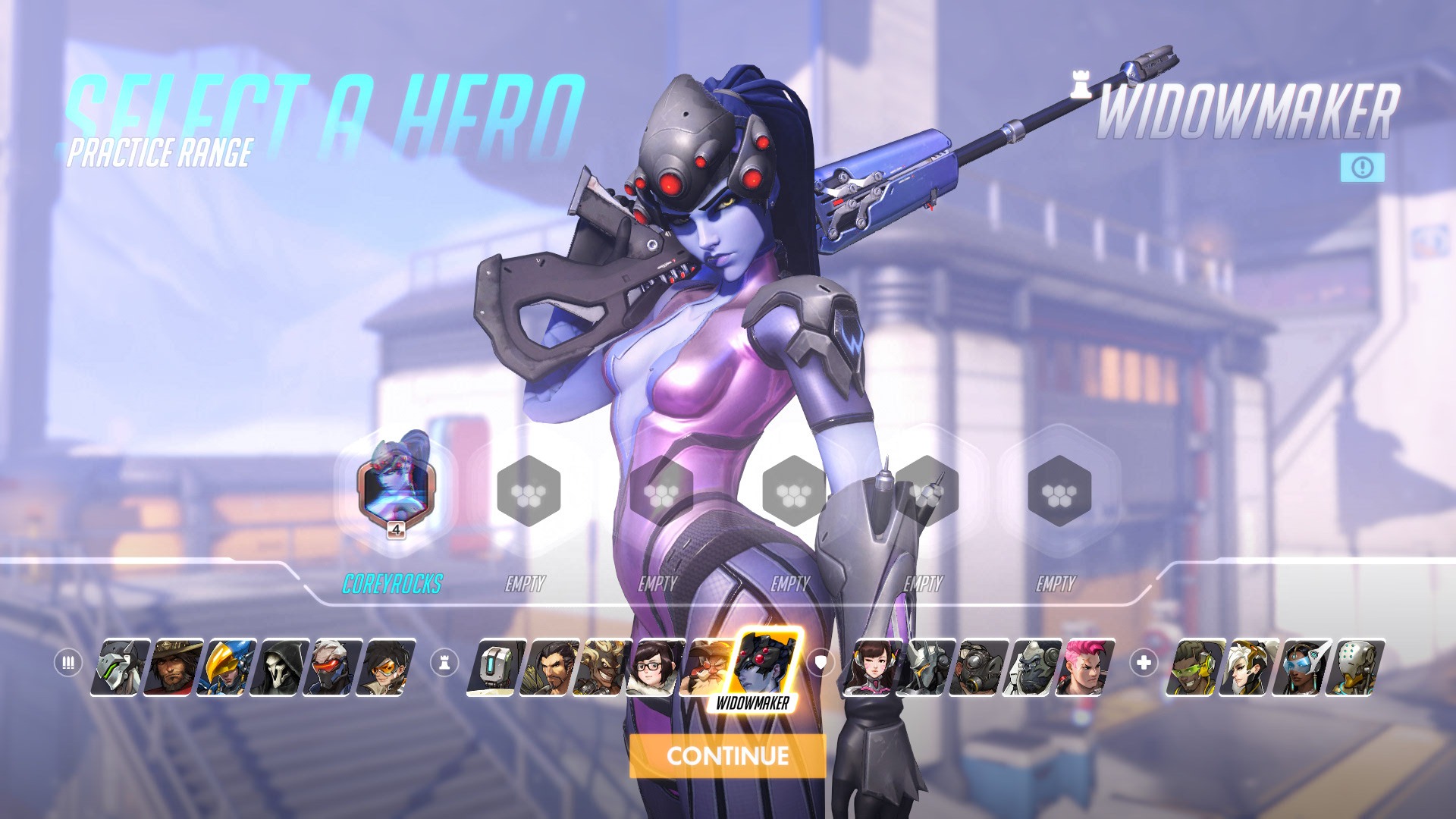 Widowmaker is a perfect assassin: patient, ruthlessly efficient, and without emotion or remorse. Widowmaker equips herself with whatever it takes to eliminate her targets, including mines that dispense poisonous gas, a visor that grants her squad infra-sight, and a powerful sniper rifle that can fire in fully-automatic mode.

Best used as a long range defense character as the Windowmaker is a sniper who excels at picking off people – and when you charge her weapon fully and have good aim, you can nearly one shot kill most enemy heroes. She does have poor health though and mobility, so be sneaky and stand at a distance. 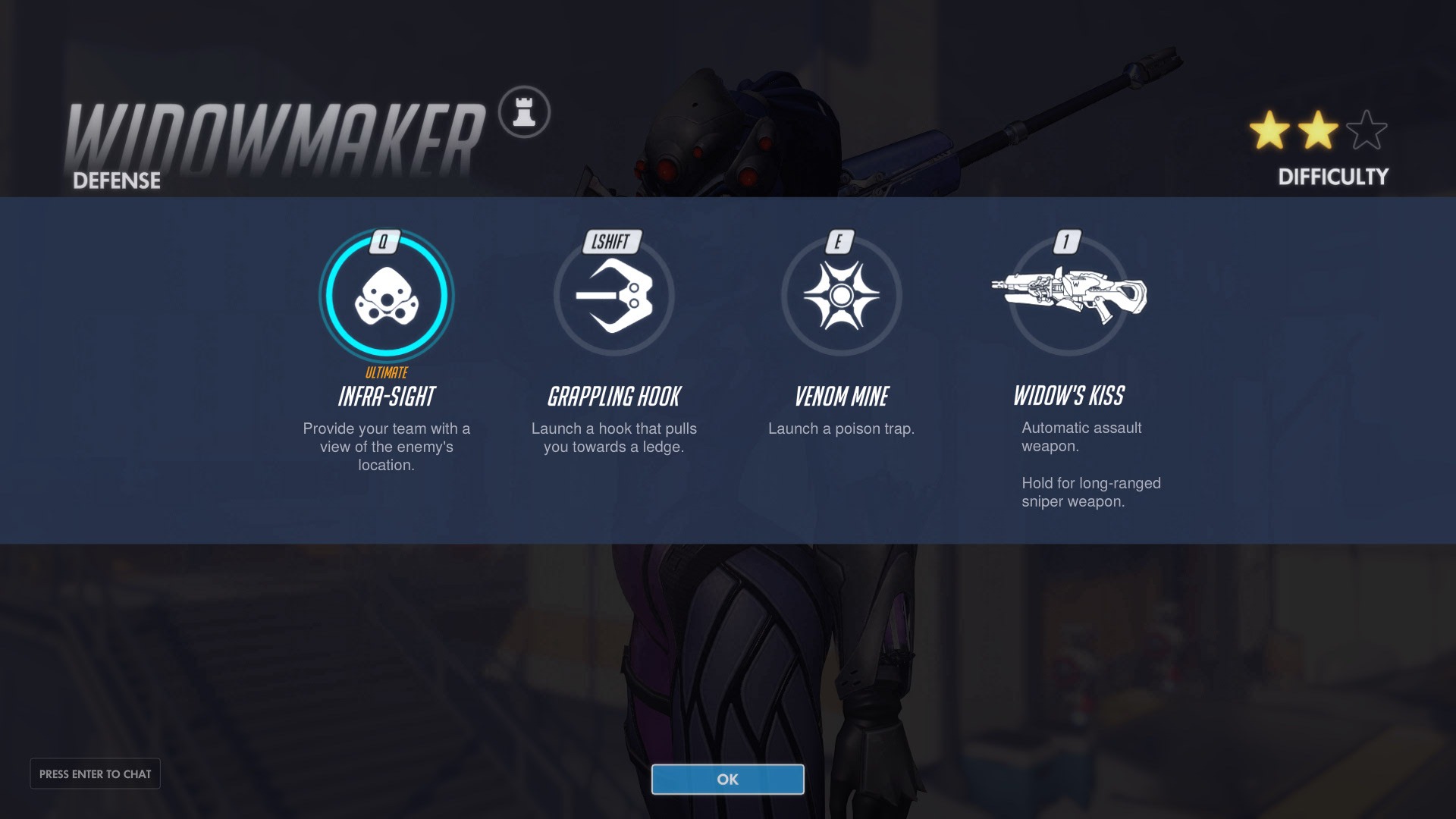 Widowmaker’s versatile sniper rifle is ideal for scope-aimed shots at distant targets. Should targets close to medium range, the rifle can also be fired in fully-automatic mode.

Widowmaker launches a grappling hook towards the location she’s aiming at – when the hook connects with a scalable surface, she’s quickly drawn towards it, allowing her to expand her view of the battlefield and evade or flank targets.

Widowmaker adheres a swiftly-arming venom mine to nearly any surface. When a target wanders within range of the mine’s motion trigger, it explodes, delivering poison gas to any enemies in the vicinity.

Widowmaker’s recon visor allows her to see the heat signatures of her targets through walls and objects for a moderate amount of time. This enhanced vision is shared with her allies.