Do you have what it takes to be a hero that best deal damage and has the goal of seeking out, engaging and destroying the enemy player in Overwatch, then one of these offensive heroes might be for you.

Offensive heroes use speed and firepower to scout fortifications, isolate any heroes and tear apart defenses – often capable of ending a fight in seconds. These heroes gain their incredible assortment of mobility and damaging abilities at a cost, such as not having natural defensive stats such as armor / shields and minimal self-sustained to stay alive and extend battles. Lastly, they generally lack further abilities to support team mates. The best offensive strategies usually mean being the first to a fight and keeping the pressure on your enemies until your ultimate victory.

See below for a list of all of the Offensive heroes in Overwatch with their best abilities and an overview on their stats and best uses. 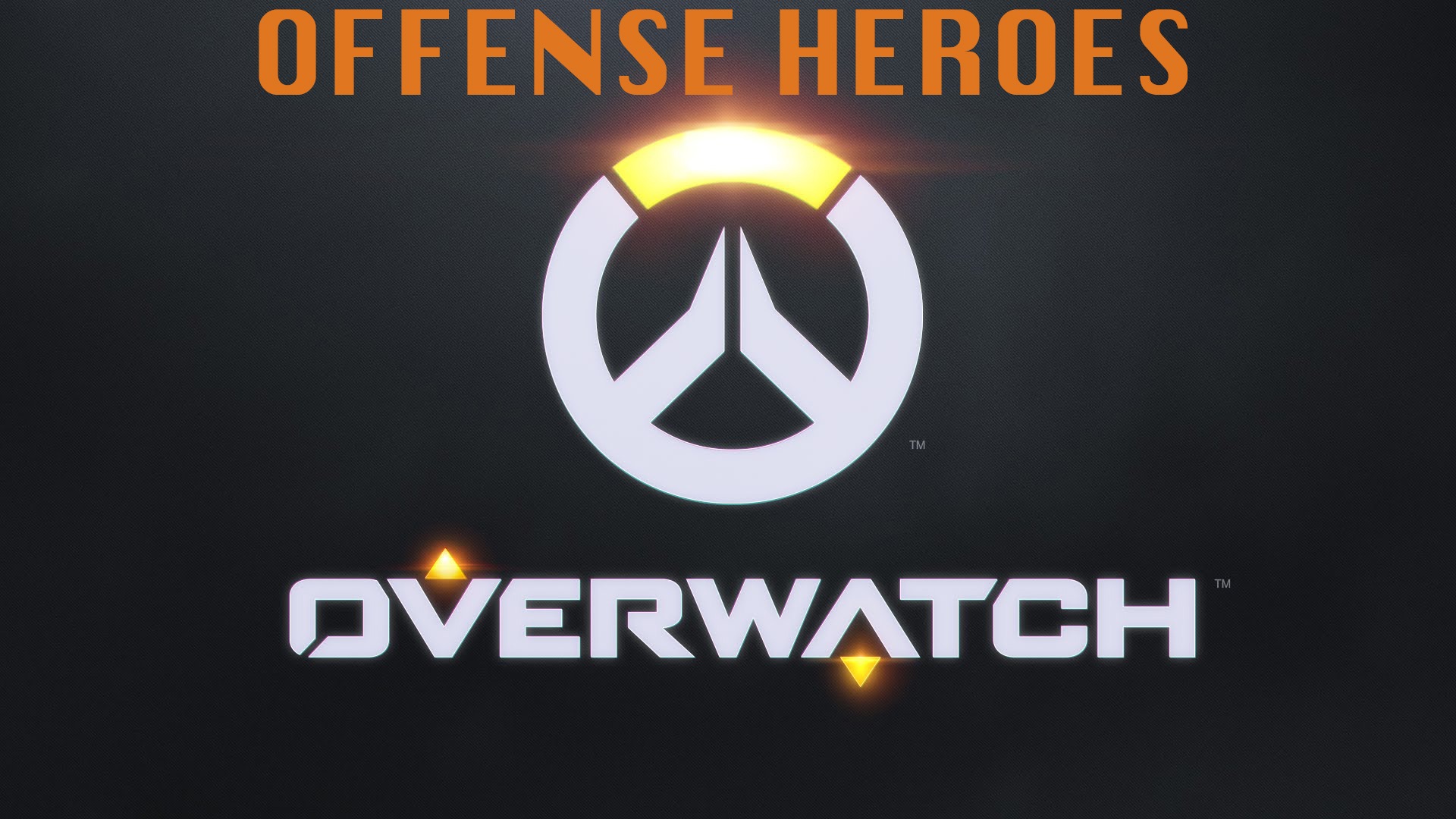 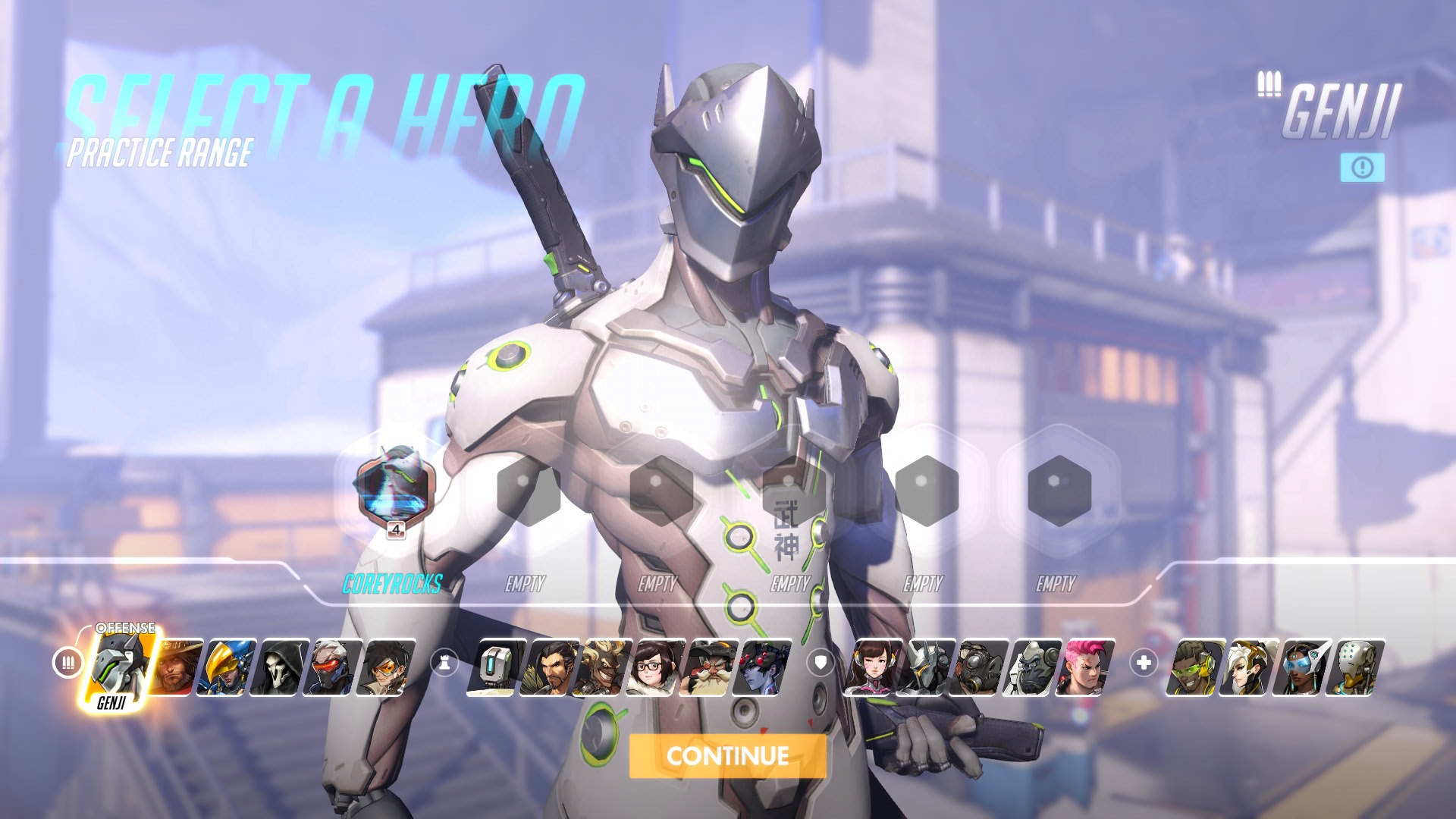 Genji is a cyborg ninja and deadly warrior who has found peace with his mechanical body. Genji flings precise and deadly Shuriken at his targets, and uses his technologically-advanced katana to deflect projectiles or deliver a Swift Strike that cuts down enemies.

Genji specializes in melee attacks with speed and damage, but he does lack defense and health making him extremely weak if caught off-guard. This is the perfect character / hero those who like to master one on one combat. 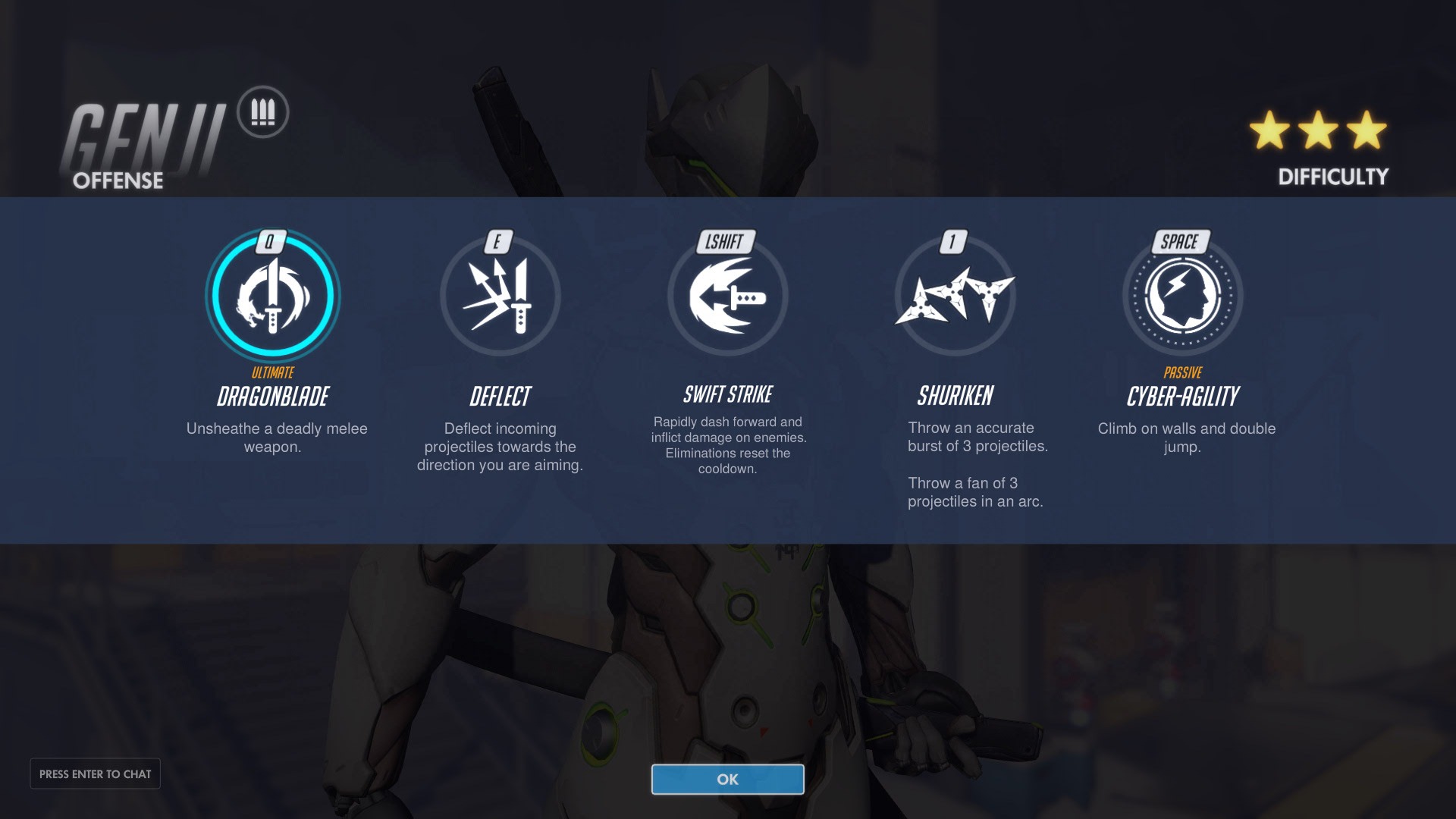 With lightning-quick swipes of his sword, Genji reflects an oncoming projectile and sends it rebounding towards his opponent.

Genji darts forward, slashing with his katana and passing through foes in his path. If Genji eliminates a target, he can instantly use this ability again.

Genji brandishes his katana for a brief period of time. Until he sheathes his sword, Genji can deliver killing strikes to any targets within his reach. 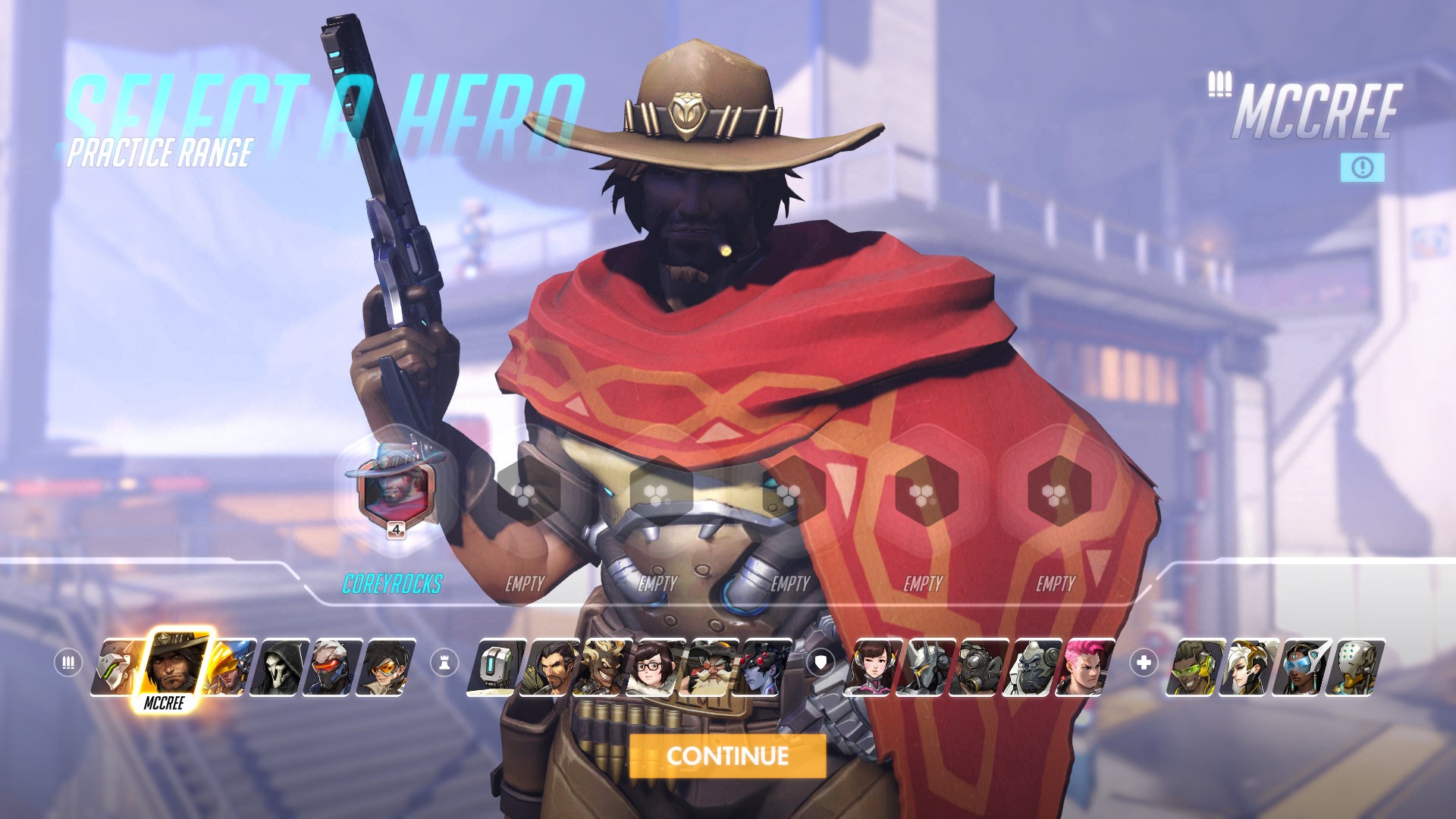 McCree is an outlaw gunslinger who doles out justice on his own terms. He is armed with his Peacekeeper revolver, McCree takes out targets with deadeye precision and dives out of danger with eagle-like speed.

This can be a very powerful offense hero who can best deal insane amounts of damage in a short amount of time. If you can get McCree one on one against an opponent, then this is where he shines. Also, McCree’s ultimate can clear a room of enemies relatively quickly.

There are some downsides to McCree, such as his slow speed and slow firing speed – so he does take a little getting used to in order to master his shooting / re-loading through his roll ability. 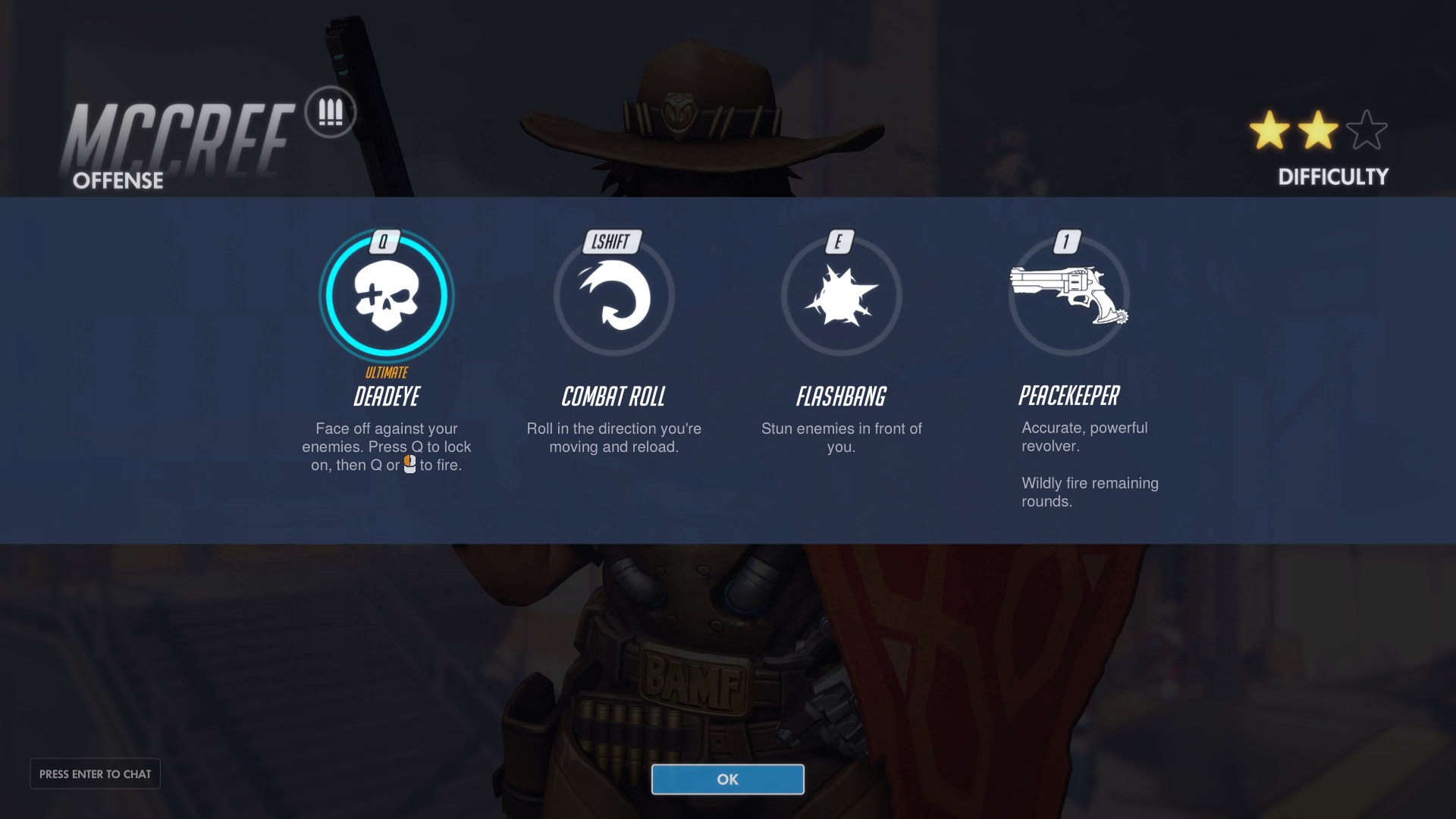 McCree fires off a round from his trusty six-shooter. He can fan the Peacekeeper’s hammer to swiftly unload the entire cylinder.

McCree dives in the direction he’s moving, effortlessly reloading his Peacekeeper in the process.

McCree heaves a blinding grenade that explodes shortly after it leaves his hand. The blast staggers enemies in a small radius.

Focus. Mark. Draw. McCree takes a few precious moments to aim; when he’s ready to fire, he shoots every enemy in his line of sight. The weaker his targets are, the faster he’ll line up a killshot. 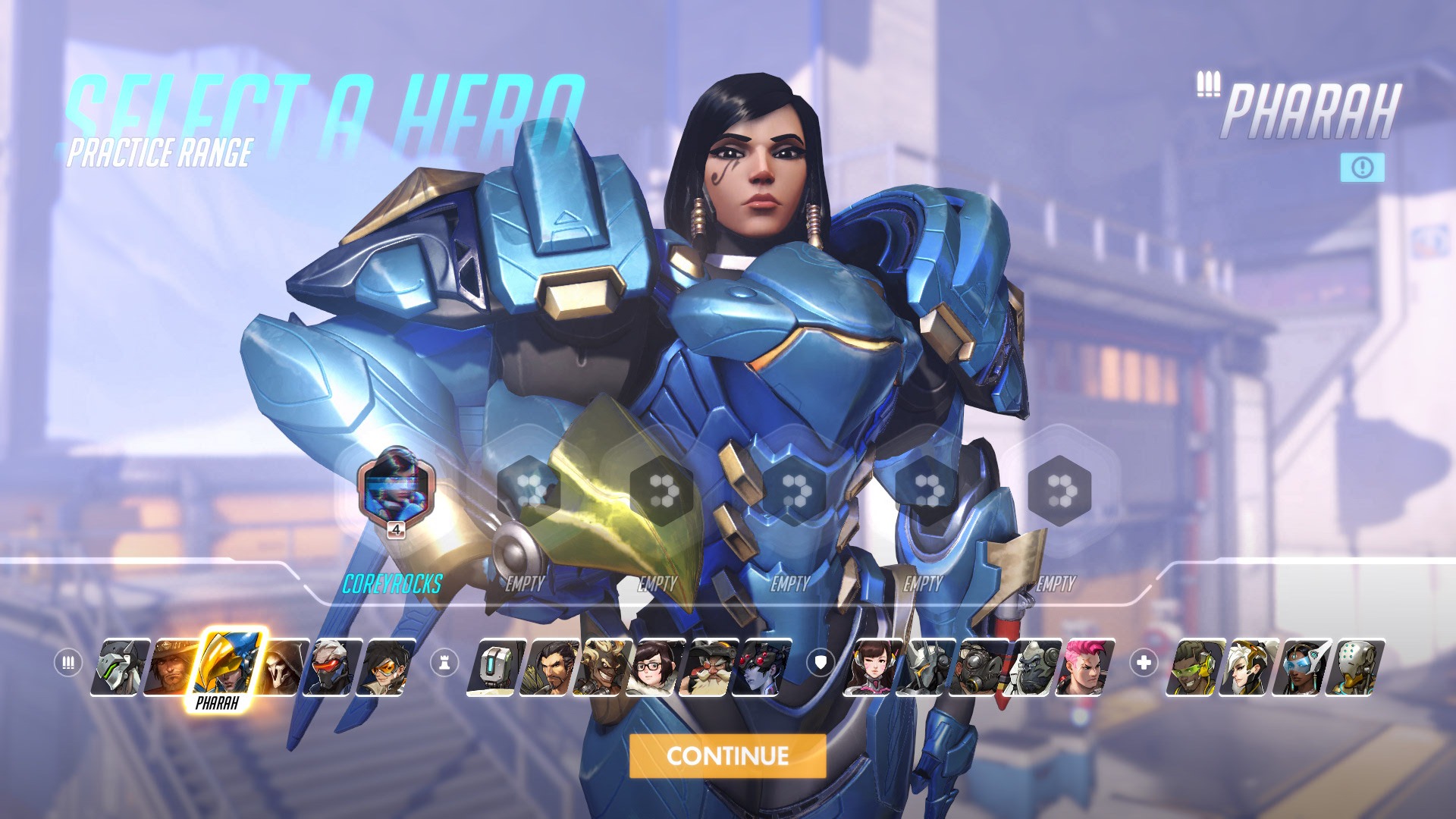 Pharah is a decorated soldier who patrols the skies in her experimental Raptora combat suite. Soaring through the air in her combat armor, and armed with a launcher that lays down high-explosive rockets, Pharah is a force to be reckoned with.

Best used in long range situations, Pharah uses a powerful rocket launcher to hit her target and anyone else nearby. She can also be useful through her temporary flying ability.

Some downsides to Pharah are her slow firing speeds and her exposure to her enemies while flying. 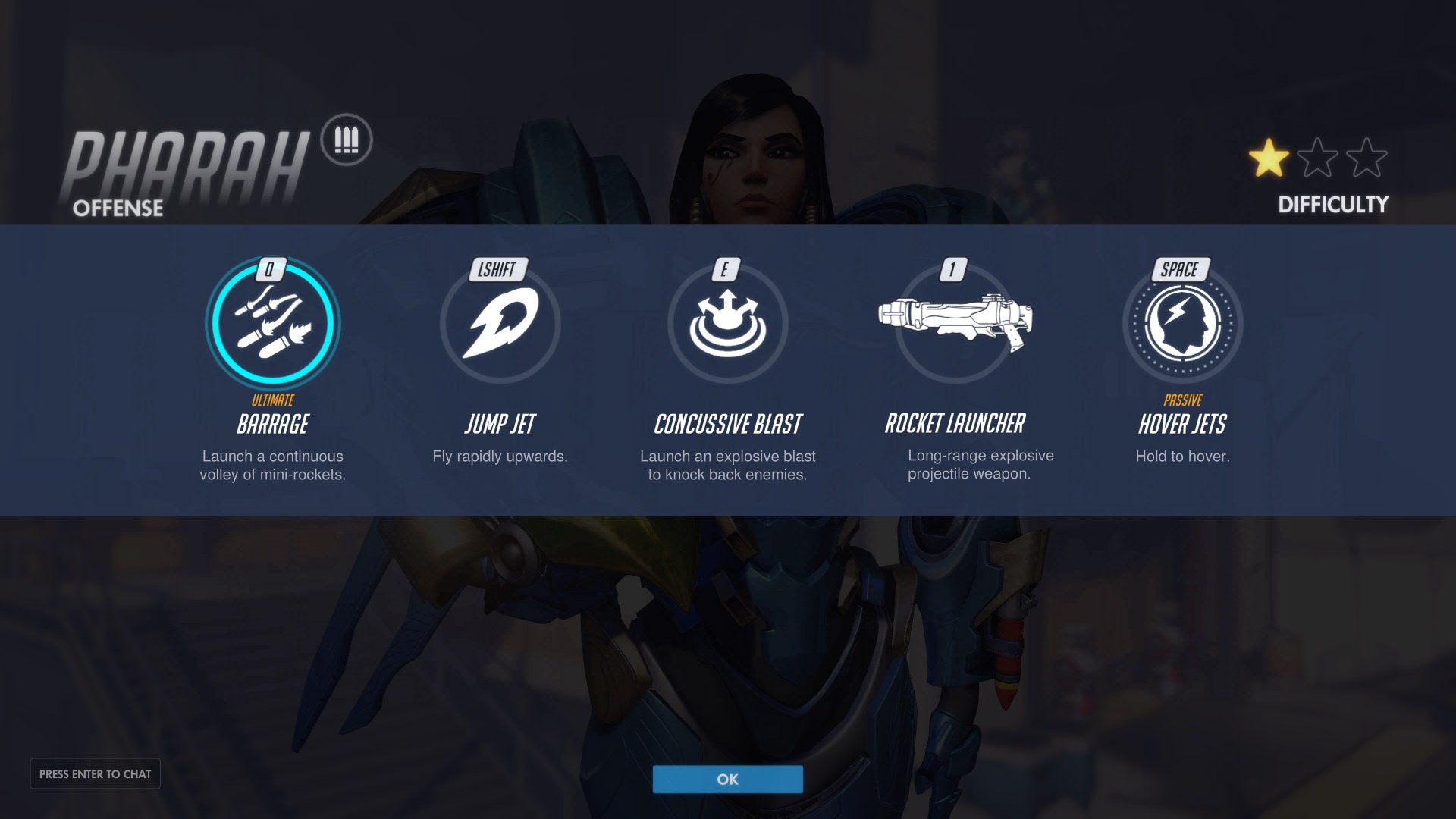 Propelled by her suit’s thrusters, Pharah soars high into the air.

Pharah looses a wrist rocket that knocks back any enemies it strikes.

Pharah directs a continuous salvo of mini-rockets to destroy groups of enemies. 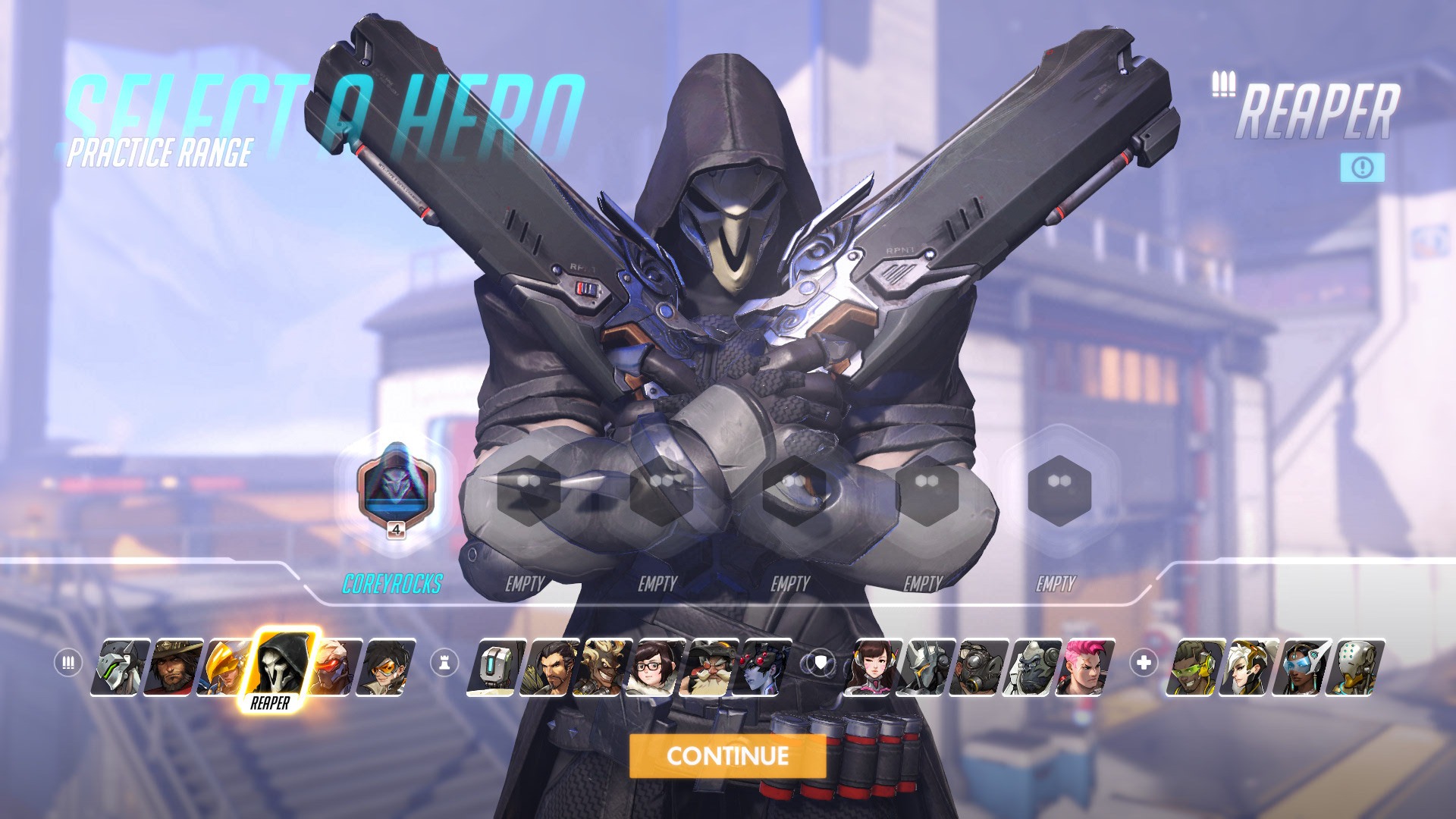 The Reaper is a mercenary who is a ruthless killer who hunts the former agents of Overwatch. Hellfire Shotguns, the ghostly ability to become immune to damage, and the power to step between shadows make Reaper one of the deadliest beings on Earth.

The Reaper can be best used in short to medium ranged distances and he is very mobile with his invisibility and teleporting skills. The downside to his shotguns are that they are only useful is medium to short ranges, so he is best used in closer combat. 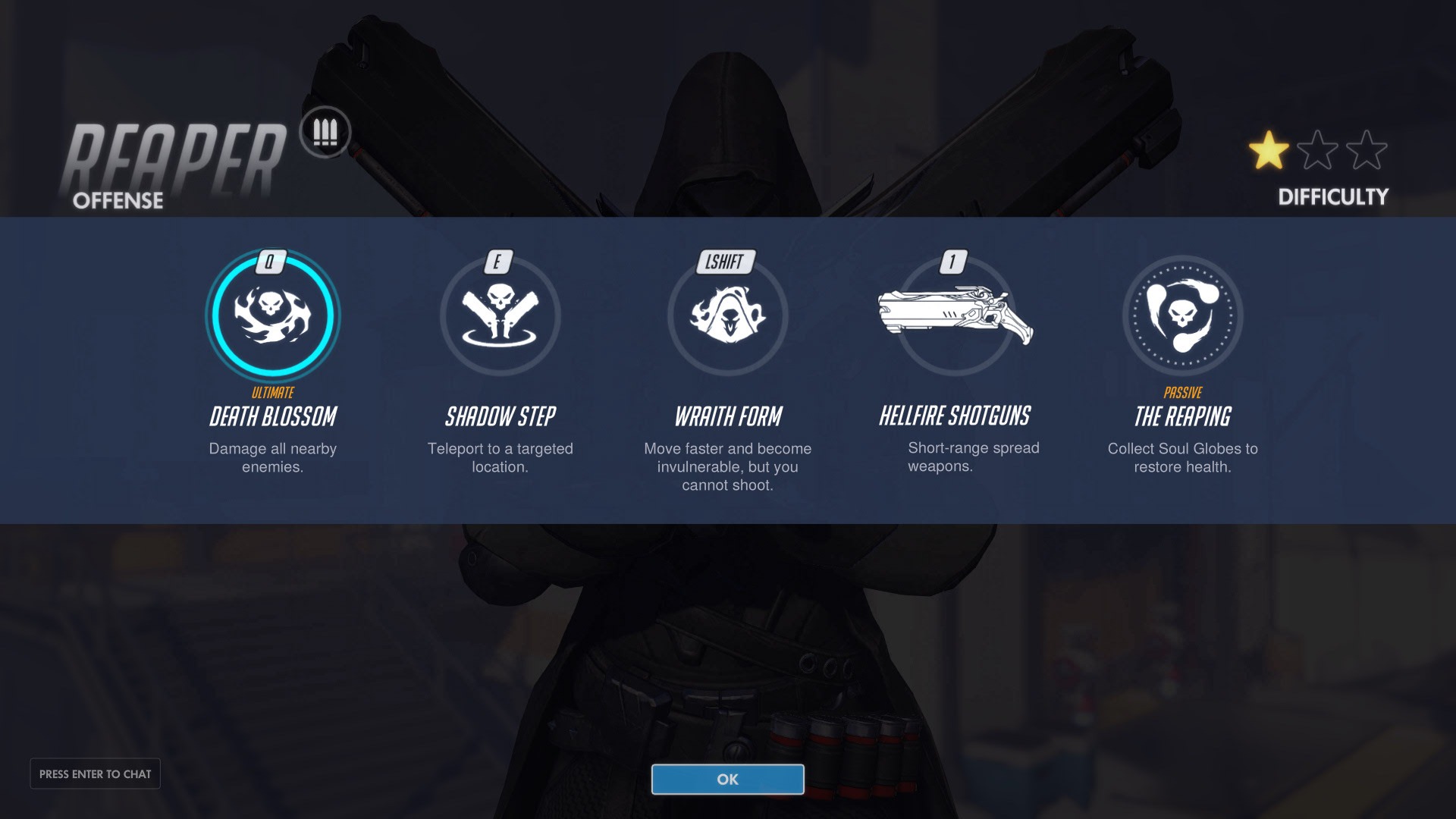 Reaper becomes a shadow for a short period of time. While in this form, he takes no damage and is able to pass through enemies, but cannot fire his weapons or use other abilities.

After marking a destination, Reaper disappears and reappears at that location.

In a blur of motion, Reaper empties both Hellfire Shotguns at breakneck speed, dealing massive damage to all nearby enemies. 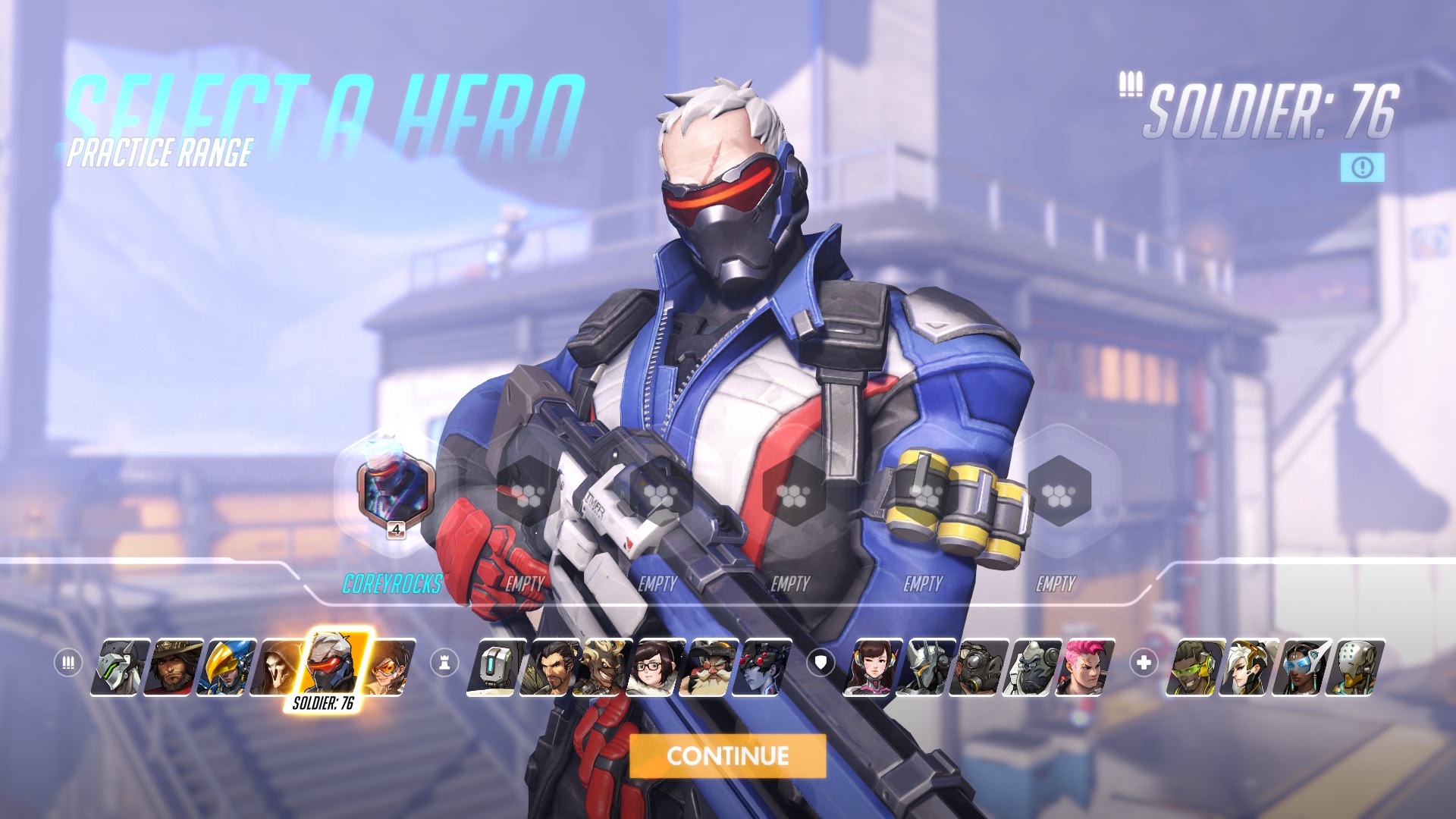 Soldier: 76 is a vigilante who will stop at nothing to bring the enemies of Overwatch to justice. Armed with cutting-edge weaponry, including an experimental pulse rifle that’s capable of firing spirals of high-powered Helix Rockets, Soldier: 76 has the speed and support know-how of a highly trained warrior.

Specializing best in ranged combat using a Heavy Pulse rifle that can give out consistent damage and his healing ability allows him to be self sufficient – and due to his unique and variety of abilities, Soldier: 76 is probably one of the most versatile and generalist of the Offense heroes is Overwatch. 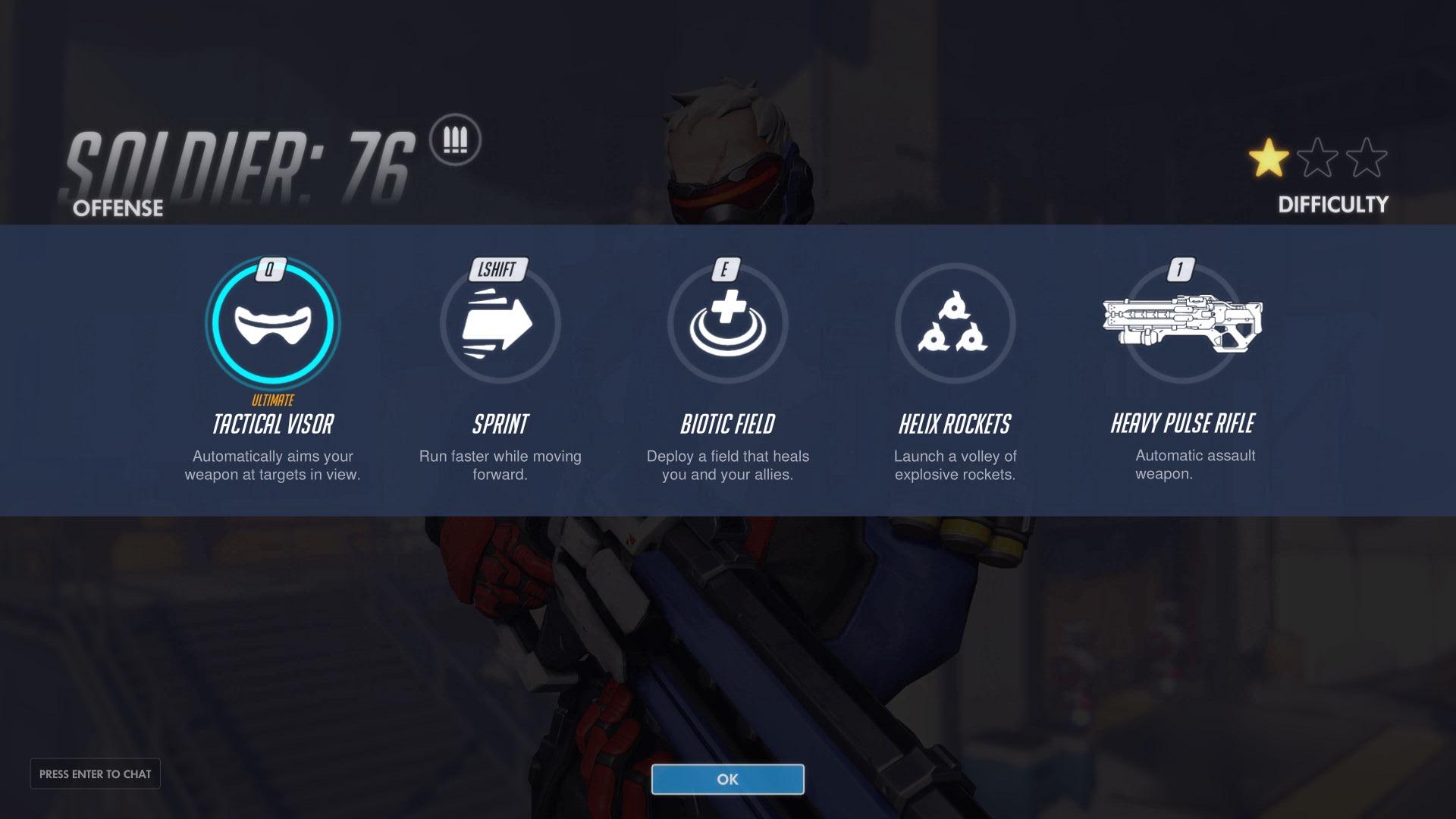 Tiny rockets spiral out of Soldier: 76’s Pulse Rifle in a single burst. The rockets’ explosion damages enemies in a small radius.

Whether he needs to evade a firefight or get back into one, Soldier: 76 can rush ahead in a burst of speed. His sprint ends if he takes an action other than charging forward.

Soldier: 76 plants a biotic emitter on the ground. Its energy projection restores health to 76 and any of his squadmates within the field.

Soldier: 76’s pinpoint targeting visor “locks” his aim on the threat closest to his crosshairs. If an enemy leaves his line of sight, Soldier: 76 can quickly switch to another target. 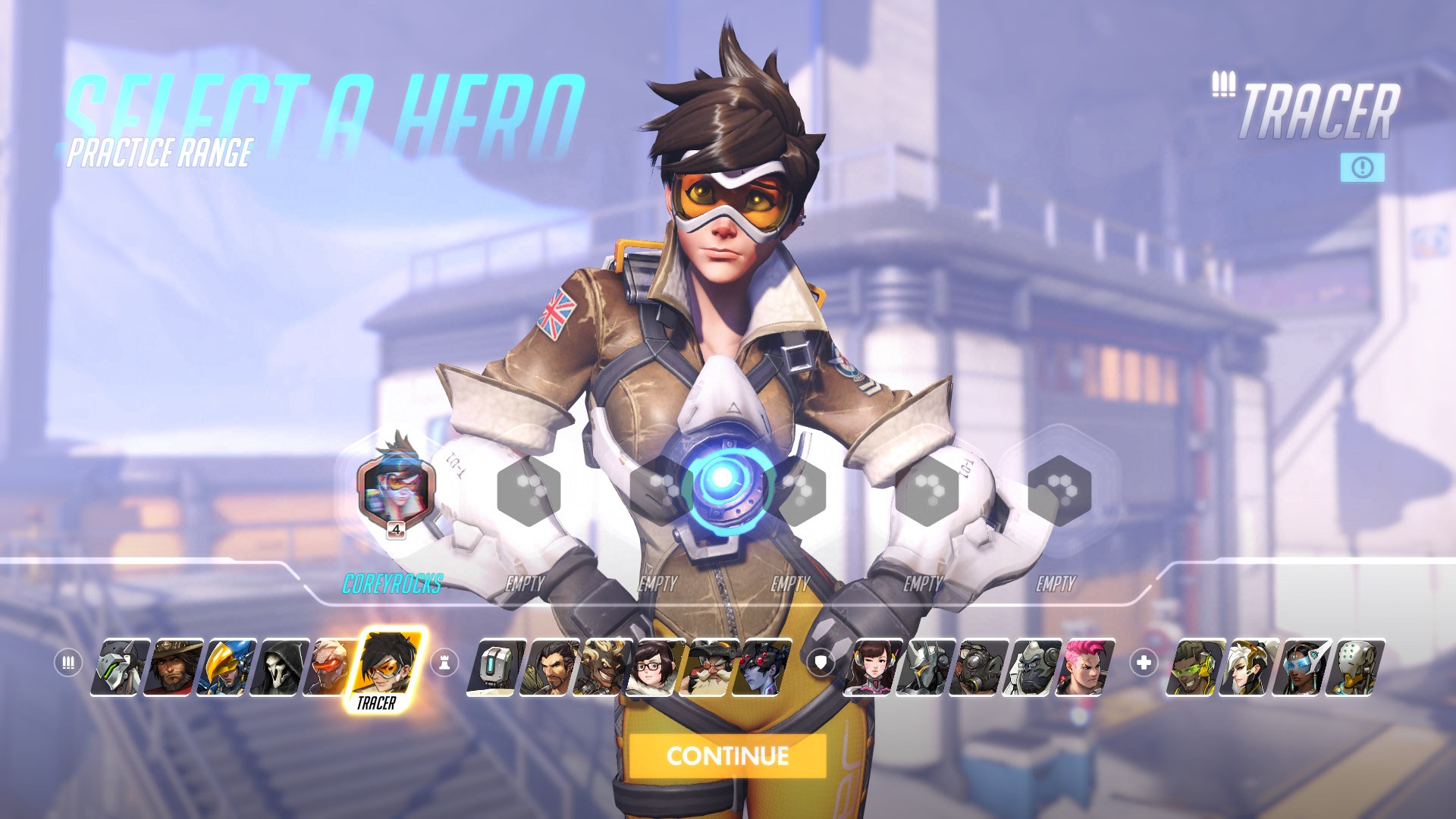 Tracer is a former Overwatch agent, time-jumping adventurer and an irrepressible force for good. Toting twin pulse pistols, energy-based time bombs, and rapid-fire banter, Tracer is able to “blink” through space and rewind her personal timeline as she battles to right wrongs the world over.

She relies on speed and agility in order to get nice and close to the enemy players, kill them and then run. This is achievable through the use of her blink skill and recall to get back to safety. She can be quite fragile and even the weakest of players can easily kill her, so you have to be quick! 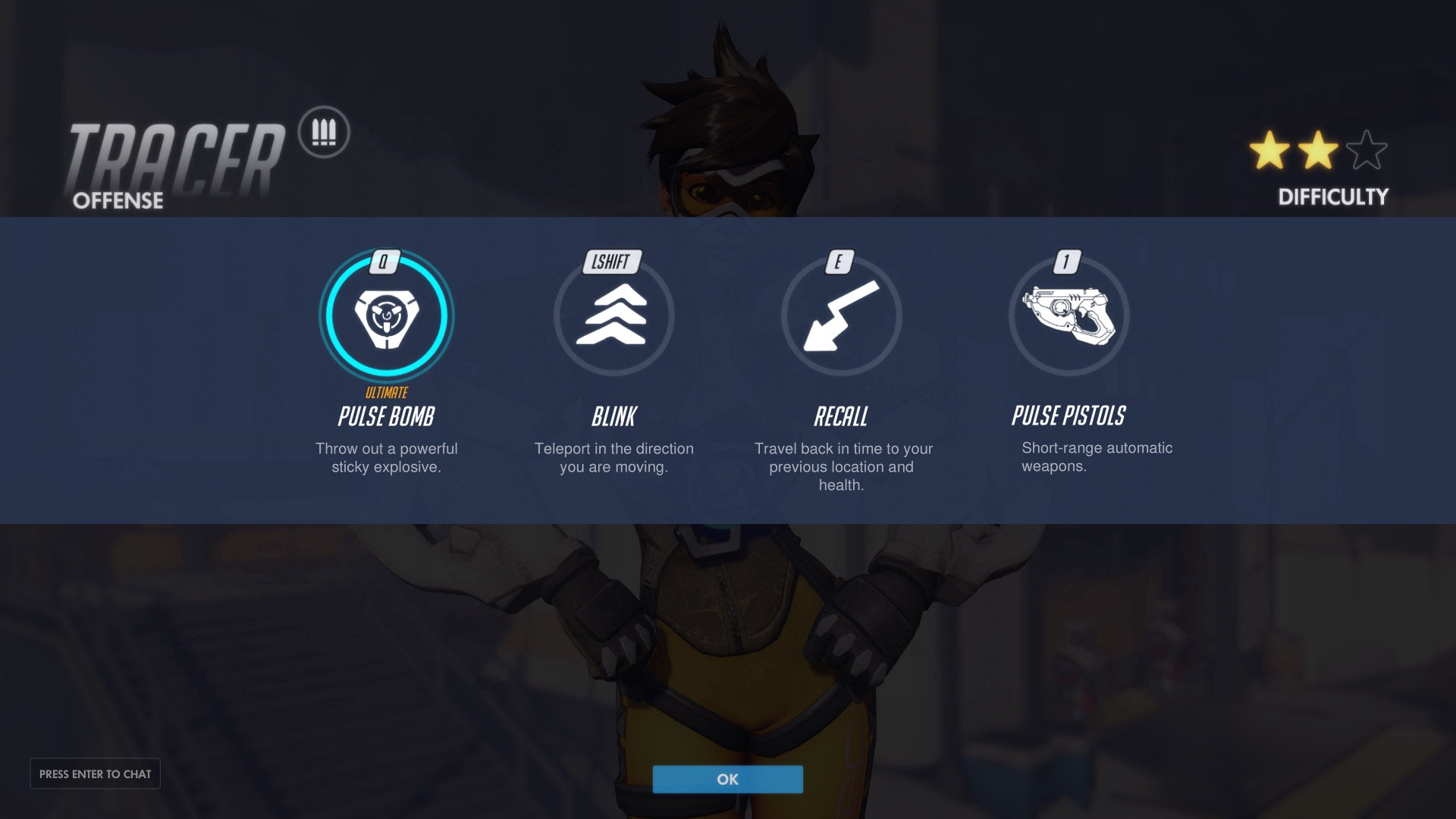 Tracer rapid-fires both of her pistols.

Tracer zips horizontally through space in the direction she’s moving, and reappears several yards away. She stores up to three charges of the blink ability and generates more every few seconds.

Tracer bounds backward in time, returning her health, ammo and position on the map to precisely where they were a few seconds before.

Tracer lobs a large bomb that adheres to any surface or unfortunate opponent it lands on. After a brief delay, the bomb explodes, dealing high damage to all enemies within its blast radius.