The Vapid FMJ was one of the two Super Cars released in the GTV Finance & Felony DLC update and is at the time of writing this the fourth best super car for racing, just barely – which keeps the super cars class in GTA V relatively balanced. The FMJ is probably the fastest rear wheel drive car in GTA V and has a ton of traction, which can possibly make this care the fastest for airport track type races – it also has quite a few modifications in the mod shop for those who want to purchase and use this in races; plus this car looks very bad ass.

Even though the Vapid isn’t considered one of the top 3 supercars for racing, it does have a second place top speed – which would make it ideal for more straight type races. The exact tope speed in the game is 125mph, which is identical to the Adder, while also being reasonably well around corners and its main weakness being acceleration.

As the rate of infant heart disease suggests, power to weight ratio has never been America’s strong suit – until now. With the FMJ, Vapid put the American supercar on a raw food diet and gave it colonic irrigation. The result? With the same primal engine under bodywork that’s 90% carbon fiber and 10% patriotic sentiment, this thing will go 0 to 60 on the back of nothing more than a light sneeze. (legendarymotorsport.net/car-details76)

Below you can view a video and gallery of the Vapid FMJ being used in GTA V online. 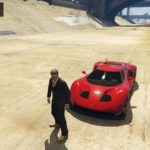 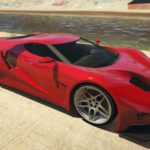